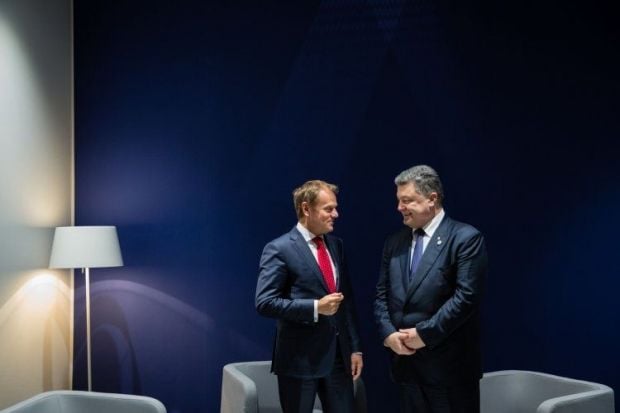 Poroshenko informed the President of the European Council on the developments in Donbas. He emphasized that Russia and Russian-backed militants kept ignoring the Minsk agreements, the report says.

The parties agreed that sanctions against Russia must be prolonged until full implementation of the Minsk agreements by Russia.

Tusk noted that all the EU countries highly appreciated their unity in the attitude towards the aggression against Ukraine.

"The interlocutors also discussed the developments in Syria. They agreed that Russia's participation rather created problems than helped solve them," the report reads.

The President emphasized that despite difficult situation on the frontline, Ukraine did not stop on the path of reforms and demonstrated real progress.

Poroshenko noted that DCFTA between Ukraine and the EU would come into force on January 1, 2016. He believes it will strengthen trade relations with the EU and economic independence of Ukraine.

The parties also discussed the issue of a visa-free regime. The President noted the importance of that issue for Ukrainian people.

Poroshenko invited Tusk to visit Ukraine at his convenience.