The operational headquarters of the Right Sector activists of the Crimea blockade has announced they terminate participation in the rally. 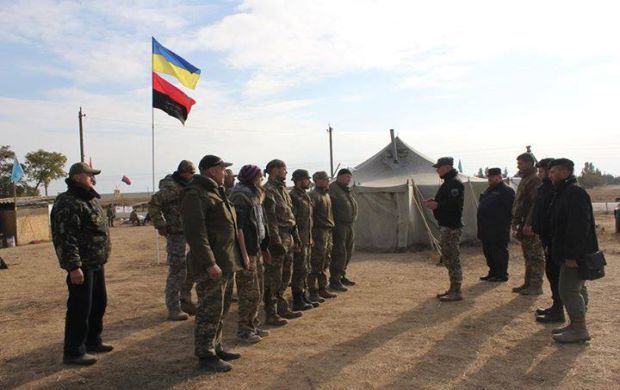 "The latest statement of the Mejlis of the Crimean Tatar people, which was not coordinated with us and other representatives of public organizations, volunteer battalions and patriotic movements, who are members of the Crimean Maidan led by Lenur Islyamov, is directed to concessions to both external and internal enemies of Ukraine," according to the statement on Facebook.

Read alsoCrimea energy blockade activists ease gripIt is noted that "the resumption of power supplies through one power transmission line, which leads directly to a plant of the pro-Putin oligarch Firtash, is treated by us as another anti-Ukrainian step of the present regime and flirting with enemies of some of our partners and allies."

"Taking into account the recent reaction of the Russian Federation on the results of the Crimea blockade, we see the concentration of a large amount of military equipment and human resources in a short distance from the Ukrainian military checkpoints and activists of the Crimean blockade. Under such circumstances, the Right Sector is stopping its activities in the Crimean Maidan, but our combat units will be aimed at strengthening the Ukrainian military, who are defending Ukrainian frontiers along the demarcation line with the occupied territory of Crimea," the headquarters said.

Read alsoPoroshenko: Emergency power supplies to Crimea through one transmission line to be restored soonHowever, activists said that the Right Sector reserved the right to monitor and assist in the further development of this rally at different levels and by all available means, in particular by putting pressure on the current government.