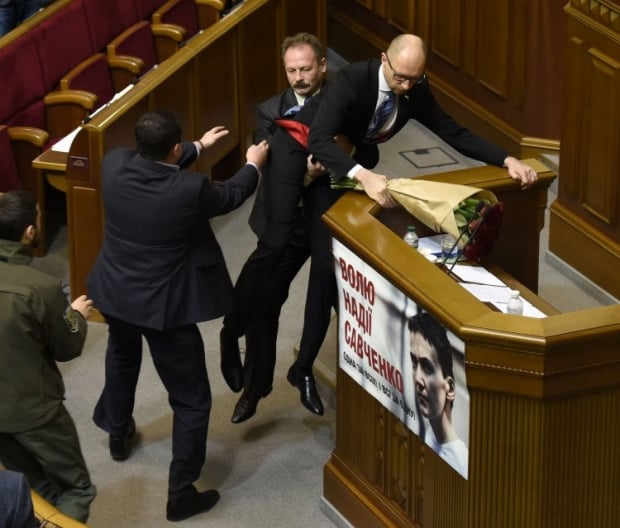 He noted that the decision was adopted by "an overwhelming majority."

At this, an UNIAN correspondent reported MP Barna announced that he had left the faction at a meeting of the Verkhovna Rada Procedure Committee that was assessing Barna's responsibility for the incident with Prime Minister Arseniy Yatsenyuk.

"It may not be the European-style behavior, but other methods don't work. Because, if Yatsenyuk does not leave, I am afraid people will take him out," Barna said.

He also complained that MPs did not put their signatures he was collecting, under a resolution calling for the Ukrainian government's resignation, according to Ukrainian online newspaper Ukrainska Pravda.

Read alsoBrawl erupts in Rada during PM addressAs UNIAN reported earlier, one of MPs provoked a fight in a session hall between the deputies of the Coalition during Prime Minister Arseniy Yatsenyuk's speech today. The deputies got into a fistfight after an MP from the Bloc of Petro Poroshenko, Oleh Barna, who is collecting signatures for the Rada's non-confidence in the Cabinet, came up to the rostrum during Arseniy Yatsenyuk’s address, presented him a bouquet of red roses, grabbed him and dragged him down.