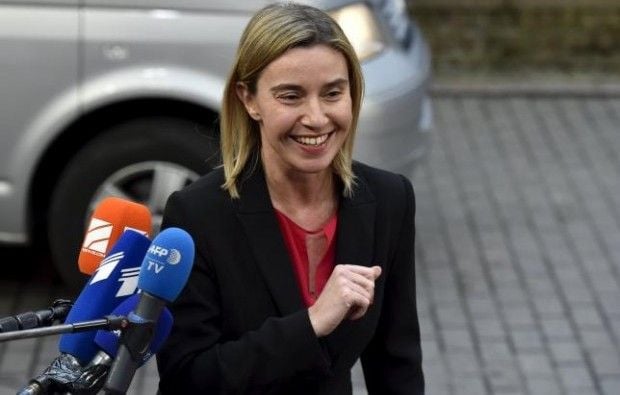 "We were all united in applauding and encouraging the outstanding work that the Ukrainian authorities have done in the past months in order to introduce and start implementing reforms, so there is no doubt in this respect," she said following a Foreign Affairs Council meeting in Brussels on Monday.

"This does not mean that we should not look at ways to first of all, encourage, support and sustain the reforms inside Ukraine from a social, financial, and a political point of view, without substituting the Ukrainian authorities, the government, the President, the Parliament, the local authorities or the political system. We must actively support this process because I think we have learnt from the past, from the present," she said.

"Once you start a process there is never enough, you also need to continue focusing on how you can better make it sustainable internally, externally and in the region," she said.

In her words, there is not at all a shift of focus – the Minsk Agreements need to be fully implemented by all sides.

"We had a discussion on Ukraine, restating our full and united support to the full implementation of the Minsk Agreements but focusing this time, maybe for the first time in this clear and focused way, not only and not so much on the Minsk implementation  but on the reform process inside Ukraine and especially the reform of the judiciary, the reform of the public administration sector, the decentralization reforms and recognizing the incredible, outstanding work that the Ukrainian authorities have done over the past months to move forward the reform agenda with very concrete steps," she said.

She said that the EU Foreign Ministers shared also the assessment that this work needs to continue, especially with the provisional application of a deep and comprehensive free trade area (DCFTA) since January 1. They recognized the need to "support the Ukrainian authorities in a better coordinated way between the European Union and Member States to make sure that the reform agenda continues, especially that it is implemented, and that the benefits of the reform agenda manage to reach the Ukrainian people."

"So, time for the agenda to deliver – in very difficult circumstances – but this is exactly the meaning of our engagement  with Ukraine to support and to sustain in, I hope, I believe, an effective way," she added.