Ukrainian Ambassador to the Czech Republic Borys Zaychuk has addressed to the Czech-based Ottovo Nakladatelstvi publishing house demanding to bring in line with the international law a map of Ukraine in the "World Atlas of Football," according to the press service of the Ukrainian Embassy in the Czech Republic. 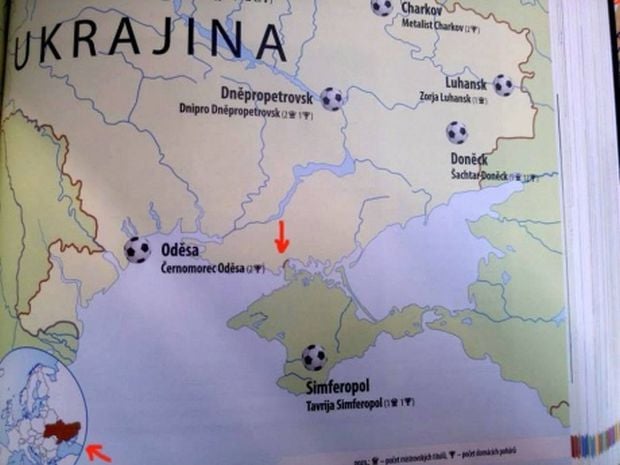 The Czech-based publisher apologized for publishing a map with the "Russian" Crimea / eurointegration.com.ua

In his formal letter, the ambassador noted that the international community is united in support of Ukrainian sovereignty and territorial integrity within its internationally recognized borders, and does not recognize the annexation of Crimea.

"Therefore, publishing the map of Ukraine without the territory of Crimea is contrary to international law and ignores the consolidated position of the European Union member states on non-recognition of the occupation of Crimea by the Russian Federation," the report says.

Read alsoCoca-Cola officially apologizes to Ukraine for "misunderstanding" with Crimea on map of RussiaAs reported earlier, a World Atlas of Football was released in the Czech Republic in November 2015, with the occupied Crimean peninsula labeled as Russian territory.

On Tuesday, February 09, the Czech publishing house Ottovo Nakladatelstvi stated that the designation of the occupied Crimea part of Russia in their Atlas of Football was the result of a cartographer’s error and was not intentional.