Poroshenko, Lagarde agree on elaboration of roadmap for reforms 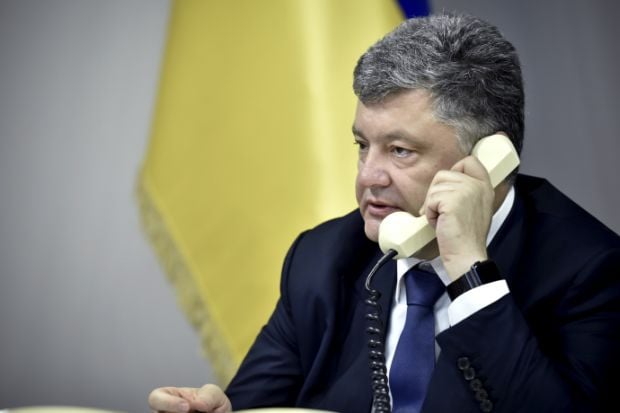 Poroshenko told Lagarde he was willing to carry out decisive actions to ensure the political and financial stability in Ukraine / Photo from president.gov.ua

"The parties agreed to elaborate a roadmap of the top-priority reforms that will give a boost to the Ukraine-IMF relations," the press service said in a statement.

Poroshenko and Lagarde also agreed on the necessity of urgent adoption of all reform-oriented laws by the Verkhovna Rada, Ukraine's parliament.

The Ukrainian president assured that Ukraine would continue reforms despite the crisis in relations between the Ukrainian government and the parliamentary coalition. He also stressed the need to "refresh" the Cabinet of Ministers without snap parliamentary elections, as it may only deepen the political crisis and slow reforms.

Poroshenko told Lagarde he was willing to carry out decisive actions to ensure the political and financial stability in Ukraine.

Lagarde issued a statement after the phone call with Poroshenko, saying that they had "had a constructive discussion."

"The President reassured me of his unwavering commitment to reforms, including improving governance and fighting corruption. We agreed on the principle of a roadmap of actions and priority measures to ensure prompt progress under the program, which will help keep Ukraine on a path toward robust and sustainable growth," she said.

Earlier on that day Lagarde said she was concerned about Ukraine's slow progress in improving governance and fighting corruption.

"I am concerned about Ukraine's slow progress in improving governance and fighting corruption, and reducing the influence of vested interests in policymaking. Without a substantial new effort to invigorate governance reforms and fight corruption, it is hard to see how the IMF-supported program can continue and be successful. Ukraine risks a return to the pattern of failed economic policies that has plagued its recent history. It is vital that Ukraine's leadership acts now to put the country back on a promising path of reform," the statement read.