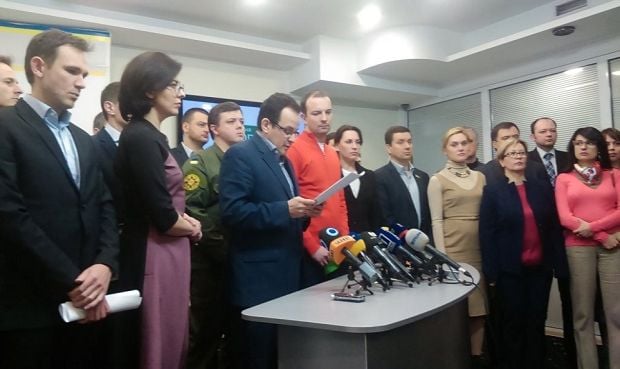 The loss of the party's 26 lawmakers leaves the alliance of Yatsenyuk's party and the President's faction without a majority in parliament. Yatsenyuk has said he is in talks with other political groups on joining the coalition, Reuters wrote.

Once Samopomich's departure has been confirmed in parliament [the faction has to officially withdraw its members' signatures under the coalition agreement], parties will have 30 days during which to officially register their new coalition, Bloomberg wrote.

"I'm ready to give a hand to anyone who cares about the country," Radical Party leader Oleh Liashko told lawmakers in Kyiv. "We're ready to take part in forming a new coalition, in a forming a new cabinet that will pull the country back from the abyss."

Their departures drew concern from allies such as the U.S., while International Monetary Fund Managing Director Christine Lagarde warned Ukraine's bailout may be halted. A $1.7 billion transfer from the Washington-based lender has been delayed since last year, holding up other bilateral aid.

The parliamentary coalition was created by five factions in the Verkhovna Rada of the 8th convocation on November 27, 2014. The following forces formed the ruling coalition: the Bloc of Petro Poroshenko, the People's Front of Arseniy Yatsenyuk, the Samopomich Party of Andriy Sadovy, the Batkivschyna Party of Yulia Tymoshenko, and the Radical Party of Oleh Liashko.