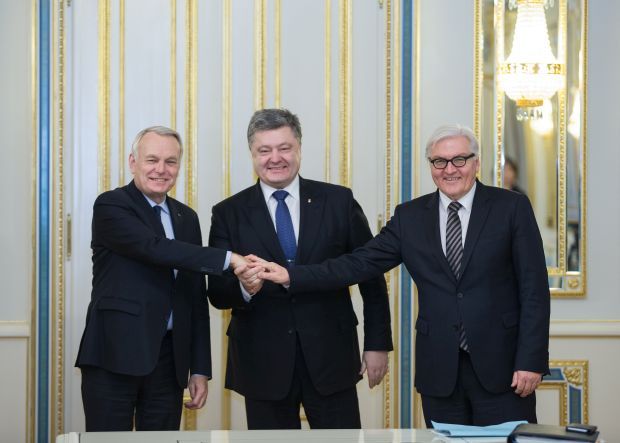 The German and French ministers of foreign affairs are visiting Kyiv / Photo from president.gov.ua

"The sides coordinated further actions on the eve of the Foreign Ministers' meeting in the Normandy Four format that will be held in Paris on March 3," the presidential administration reported.

Poroshenko greeted Jean-Marc Ayrault with his appointment as minister of foreign affairs. The Ukrainian president particularly noted that Ayrault's first foreign visit was to Ukraine.

The sides also discussed the situation in the east of Ukraine and the fulfillment of the Minsk agreements. Poroshenko expressed concern over numerous violations of the ceasefire by Russia-controlled militants and their use of banned weapons.

The Ukrainian president and the German and French ministers agreed that the political will of Russia is needed to end the shelling.

The Ukrainian president in turn underlined the importance of access of the OSCE Special Monitoring Mission to Ukraine to all the areas in occupied territory in Donbas, including the Ukraine-Russia border. He also stressed the need that all prisoners of war, including those illegally held in custody in Russia, should be freed.

What is more, the parties discussed an opportunity of deploying an international mission in Donbas as an important precondition for holding local elections under Ukrainian legislation and OSCE principles.