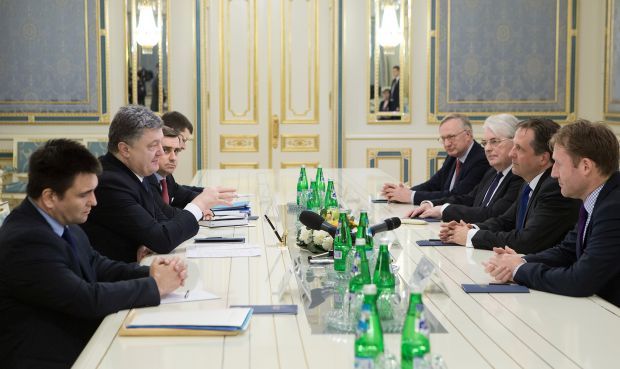 Poroshenko is meeing with meeting with Parliamentary Leader of the Democrats 66 Alexander Pechtold / Photo from president.gov.ua

"The Head of State emphasized that the Ukraine-EU Association Agreement had become a real roadmap of internal transformations for Ukraine," the presidential press service reported with reference to Poroshenko's meeting with Parliamentary Leader of the Democrats 66 from the Netherlands Alexander Pechtold.

The parties discussed topical issues of Ukraine-EU cooperation in the context of preparations for the consultative referendum on the Ukraine-EU Association Agreement scheduled for April 6, 2016, in the Netherlands.

It was stated that the Association Agreement would provide new unique opportunities for the promotion of democratic values outside the EU and development of business contacts, which would contribute to the welfare of Ukrainian and EU citizens.

Pechtold in turn thanked Ukraine for its solidarity in tackling the MH17 tragedy.