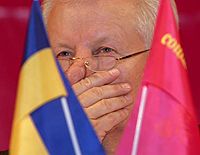 The Socialist International  refused to the Socialist Party of Ukraine in presenting the full membership in this organization.

Ukrayinska Pravda newpaper reports this referring to the source in the secretariat of the 23rd congress of the Socialist International, which took place in Athens during June 30 – July 2.