Klimkin: Paris talks of Normandy Four FMs "not decisive but just another step" 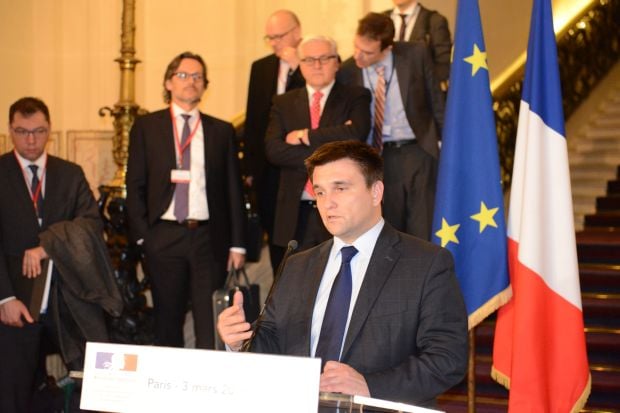 Normandy Four negotiations in Paris were not decisive / Photo from UNIAN

"Today's meeting is the next step, but we can’t talk about decisive progress, given the actual security situation, given that yesterday we had 63 attacks, given that the OSCE does not have access to many areas of Donbas and the Ukrainian-Russian border," the minister said.

According to the Ukrainian Foreign Minister, his Russian counterpart Sergei Lavrov "was not ready to go deeper into the security issues in terms of providing access to the OSCE Special Monitoring Mission." "He proposed to leave it to the experts in Minsk [Tripartite Liaison Group], so he expressed willingness to only support conceptual ideas and certain proposals of the OSCE. But we need comprehensive security," he said.

Read alsoAnxiety in ParisKlimkin stresses that comprehensive security not only means "a ceasefire and arms withdrawal." "First of all, it is the OSCE control over the territory of Donbas and the Ukrainian-Russian border. Security means withdrawal of all weaponry that is there. Without security, we can’t move in the direction of the elections, [in the temporarily occupied parts of Donbas]" said the head of the Ukrainian Foreign Ministry voicing Ukraine’s position.

Klimkin emphasized once again that "in respect of the current round of negotiations, we can’t talk about decisive progress." "But we were able to discuss in detail the number of positions of the OSCE, on the other hand – to get a clear vision of security," he said.

Ukrainian Foreign Minister noted: "It was a very difficult meeting." "We came here with three key priorities. First was the security. Based on discussions with the SMM, we expressed clear proposals," Klimkin said.

According to Ukraine’s top diplomat, these proposals are about clear access to the territory of Donbas, "this is a very clear scheme of how the SMM can get an effective monitoring along the Ukrainian-Russian border." "This is, firstly, the organization of a number of SMM bases along the border, the opportunity to conduct inspections, establish the appropriate equipment, which would allow monitoring the border and the most critical points day and night; possibilities of SMM presence from our side. We believe that this proposal, if implemented, can effectively ensure the monitoring of the section of the Ukrainian-Russian border, which is still beyond Ukraine’s control," said Klimkin.

Read alsoSteinmeier voices 'deep concern' over Ukraine ceasefire violationsAlso, the Ukrainian foreign minister said the Ukrainian side "placed a special emphasis on the establishment of security zones, such as in Debaltseve, or around the Donetsk airport". "We have focused on the need to exchange hostages. Everything that is happening now is the lack of any progress – we only managed to make a very limited swap," said the minister.

According to Klimkin, he also handed over to Lavrov, one of the non-governmental organization’s reports on "how the Ukrainian hostages in Donbas are mistreated".

Pavlo Klimkin also said that the main topic of discussion was the issue of the modality of elections. "Here, our main focus was on the need to ensure security and to have such election modalities, which would correspond to Ukrainian legislation and OSCE standards," Klimkin said.