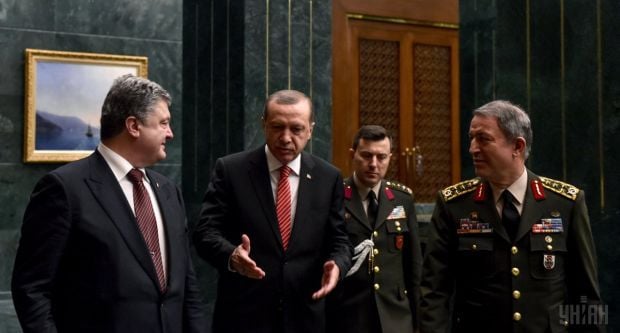 "Turkey has not been an easy partner for Ukraine," reads the article. The Ukrainian government complained that Turkey’s refusal to allow tankers to pass through the Turkish straits "prevented them from developing a liquefied natural gas terminal project on the Black Sea to diminish Ukraine's dependence on Russian energy."

Bilateral free trade talks were also put on hold in 2013, as no agreement was reached on trade in agricultural and consumer goods. Turkey condemned the annexation of Crimea by Russia two years ago, but it did not join the Western sanctions against Russia.

However, the downing of a Russian bomber by a Turkish jet last November prompted a rapprochement between Ukraine and Turkey. The two countries' leaders see each other as natural allies against a common enemy. Poroshenko and Davutoglu discussed common threats in Davos last January. On February 15, Davutoglu and Yatsenyuk announced in Kyiv that the free trade talks would be resumed, and that Turkey would lend Ukraine $50 million at a low interest. The two countries' navies conducted maneuvers in the Black Sea in early March, with an eye to a potential threat from Russia.

On March 9–10, Poroshenko paid a visit to Ankara to forge closer defense and economic links. The parties signed a declaration condemning the Russian "aggression against Ukraine." According to the declaration, cooperation between the two countries' defense ministries will be enhanced, and mechanisms of regional security in the Black Sea will be strengthened. Moreover, the declaration called for joint steps to "de-occupy Crimea."

Read alsoUkraine, Turkey to sign FTA deal before year endThe two presidents also set ambitious goals in trade. They expressed the hope that a free trade agreement between Turkey and Ukraine will be signed this year, along with double taxation and bilateral investment protection agreements.

At the same time, several Russian and Ukrainian editions are skeptical about Ukrainian-Turkish cooperation and believe that an alliance between the two countries would not be long-lasting. The skepticism over Ukrainian-Turkish relations will be dispelled only if specific achievements follow the ambitious declarations, the author says.