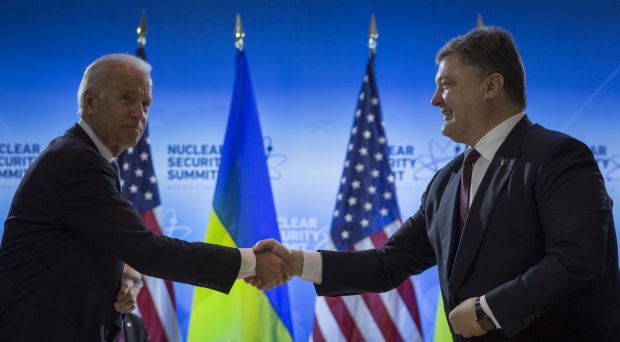 Poroshenko has met Biden on the side lines of the 2016 Nuclear Security Summit / Photo from president.gov.ua

The meeting was also attended by U.S. Secretary of State John Kerry.

"They discussed the development of the situation in Donbas in the context of Russian aggression. Secretary of State John Kerry briefed on details of recent talks in Moscow. The parties agreed that Russia needs to meet security-related conditions to implement the political provisions of the Minsk agreements," the press service said.

They also agreed that anti-Russian sanctions should remain in place until the full implementation of the Minsk Protocol by Moscow.

The release of captive Ukrainian pilot Nadia Savchenko, who was sentenced to 22 years in prison in Russia, was also on the agenda of the meeting. The parties stressed she needs to be immediately released with doctors' immediate access to her.

Biden assured Poroshenko of his country's unchanged position in non-recognition of the occupation of Crimea by Russia.

What is more, Biden informed Poroshenko about a decision by the United States to additionally allocate $335 million for the reform of Ukraine's security sector, in particular, the Armed Forces of Ukraine, the National Guard and the State Border Service.