On April 6, 2014, pro-Russian citizens began seizing government buildings in three cities simultaneously – the regional administrations in Donetsk and Kharkiv, as well as the SBU regional headquarters in Luhansk.

Several key videos showing most elaborately the assault on buildings 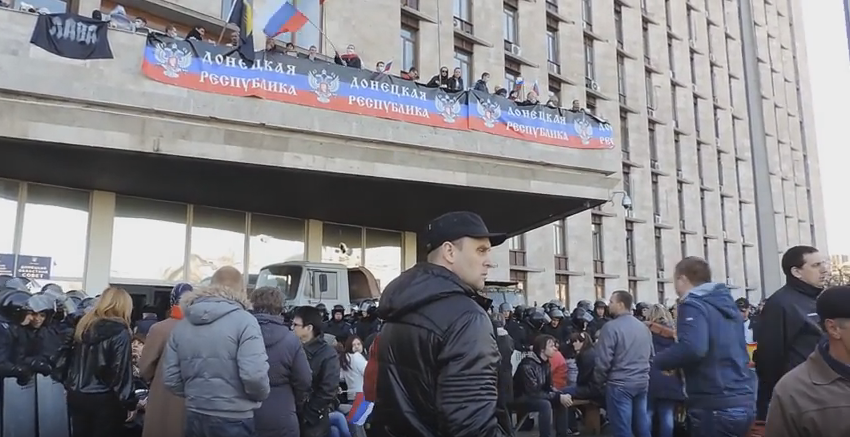 were put together, according to TSN news service.

It all started with a 2,000-strong separatist rally in the central Lenin Square. Anti-Ukrainian slogans and calls for Ukraine’s federalization were chanted from the stage surrounded by Russian flags and St. George ribbons. The initiative on seizing the building was not supported by the absolute majority, But most people still moved toward the Administration building after the rally was over.

The assault began with an attack on a security rank of young conscripts. Approaching the building, the most active separatists, many of them hiding their faces behind masks, chanted "Russia!" They began to attack the young policemen, pulling their shields.

The conscripts had to retreat soon, and the attackers broke into the building. Meanwhile, another group of separatists entered the backyard, breaking the fence with barbed wire. A grenade was thrown at one of the windows.

After the attack, the separatists removed the Ukrainian banner from the building, replacing it with the Russian flags and those of the so-called "DPR." People started bringing tires to the building’s entrance to barricade it, while “The Russian March” was played on loudspeakers.

The attack in the Kharkiv regional administration began in the late hours of April 6, while the scandalous events took place overnight. Pro-Russian activists seized the building not at once: when they broke in, they first failed to get further than the hall as there was a tight cordon of policemen inside. However, the Russian flags were waved from some windows on the first floor.

At daybreak on April 7, the Euromaidan supporters gathered in front of the building. At the same time, more people with red flags and St. George ribbons approached the scene. Later in the afternoon, as the local edition Depo.ua reported, separatists hastily proclaimed the so-called "Kharkiv People's Republic."

By this time, the attackers blocked Sumska Street with tires and started throwing stones and Molotov cocktails at the windows. A fire broke out.

However, the separatists failed to take full control of the building – the security forces raided the administration and forced the attackers to flee. The law enforcers arrested a total of 66 pro-Russian activists. Subsequently, the court chose arrest as a measure of restraint against 34 attackers, while another 19 were released under house arrest. Thirteen separatists were bailed out by former MP Oleh Tsaryov, who no prefers to be called "Speaker of Parliament of Novorossiya.”

The SBU HQ in Luhansk

The attack on the SBU HQ in Luhansk also began with a rally of pro-Russian forces. When protesters started seizing the building, stones, bricks and smoke bombs flew into the windows. As a result, the attackers took control over the building and a room with a large arsenal of weapons.