Yatsenyuk sent in his resignation from post of Speaker of VR

“I came solely under democratic..." 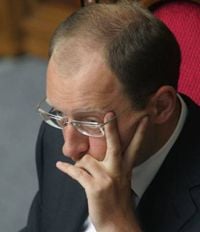 Arseniy Yatsenyuk sent in his resignation from the post of the Speaker of the Verknovna Rada.

According to an UNIAN correspondent, he said this at the session of the parliament.

According to the words of A. Yatsenyuk, it was announced yesterday about termination of activity of the coalition of the democratic forces, the procedure was completed judicially,  “but it was not completed politically”.

A. Yatsenyuk noted that because of this reason he sends in his resignation from the post of the Speaker of the Verknovna Rada.

He called on all parliament members “to be honest before themselves and before people, who elected them”.