Ukrainian President Petro Poroshenko at a meeting with Polish President Andrzej Duda thanked the Polish partners and the European Union (EU) for maintaining a strong stand in condemning the Russian aggression against Ukraine and the illegal annexation of Crimea, while supporting sovereignty, territorial integrity and independence of the Ukrainian state, Poroshenko's press service reported. 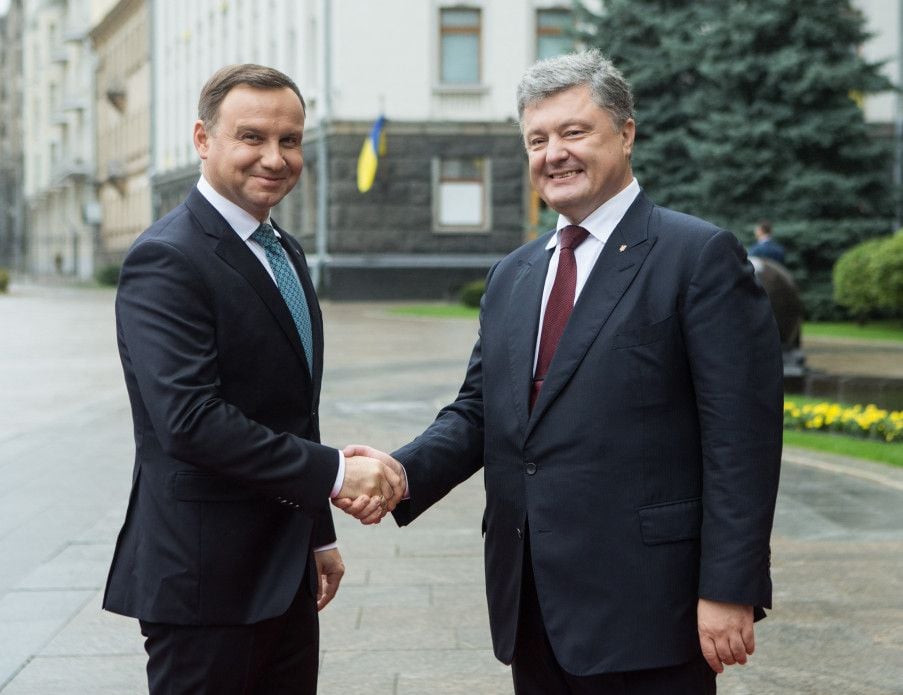 "We are thankful for your solidarity. We greatly appreciate the decision of Poland and the EU on the policy of imposing sanctions on the aggressor, with regard to both Crimea and the aggression in the east of our country. When we say that the matter should be addressed by political and diplomatic methods only, this coordination is the most efficient step," Poroshenko noted during the statement to the press, the press service said.

The head of the Ukrainian state stated that the parties discussed the extension of economic cooperation between Ukraine and Poland and exploiting every opportunity offered by the signed Ukraine-EU Association Agreement and the Deep and Comprehensive Free Trade Agreement that came into effect on January 1, 2016.

The president noted that Ukraine's enterprises are trying to make full use of these opportunities to compensate for the economic embargo, which Russia, to add to its military operations, imposed on Ukraine, limiting and prohibiting the access of Ukrainian products to Russian markets and even banning their transit.

"Our cooperation and the participation of Poland's investors in the privatization process in Ukraine, launched by the Ukrainian government, are also very important for us," Poroshenko declared.

The head of the Ukrainian state said they had also discussed further steps to support Ukraine's aspiration to introduce a visa-free regime for Ukrainian citizens in the coming weeks. "We obtained full support for our ambitions. For the past 25 years, Poland has been advocating the Euro-integration aspirations of the Ukrainians, so now we have coordinated efforts on clear cooperation in connection with the visa-free regime," the president reported.

Read alsoNormandy format may soon be "resuscitated": PoroshenkoThe head of state also underscored the position of support and joint coordination in the energy sector and noted that Ukraine greatly appreciated the position of Poland on the North Stream 2 Project and the joint stand with respect to the Turkish stream.

"2016 will be the first year when the RF's energy blackmail failed. Our European partners, primarily the Polish, contributed significantly to the blackmail not working," Poroshenko emphasized.

Meanwhile, Polish President Andrzej Duda emphasized that the invitation to attend the celebration marking the 25th anniversary of Ukraine's independence proved that Poland and Ukraine had been partners for 25 years. Poland has stood by Ukraine's side during all the hard times in its history, he recalled. "We are also together in this very hard period for Ukraine, while a serious conflict in the east of the Ukrainian state and the occupation of Crimea are ongoing," Andrzej Duda stated.