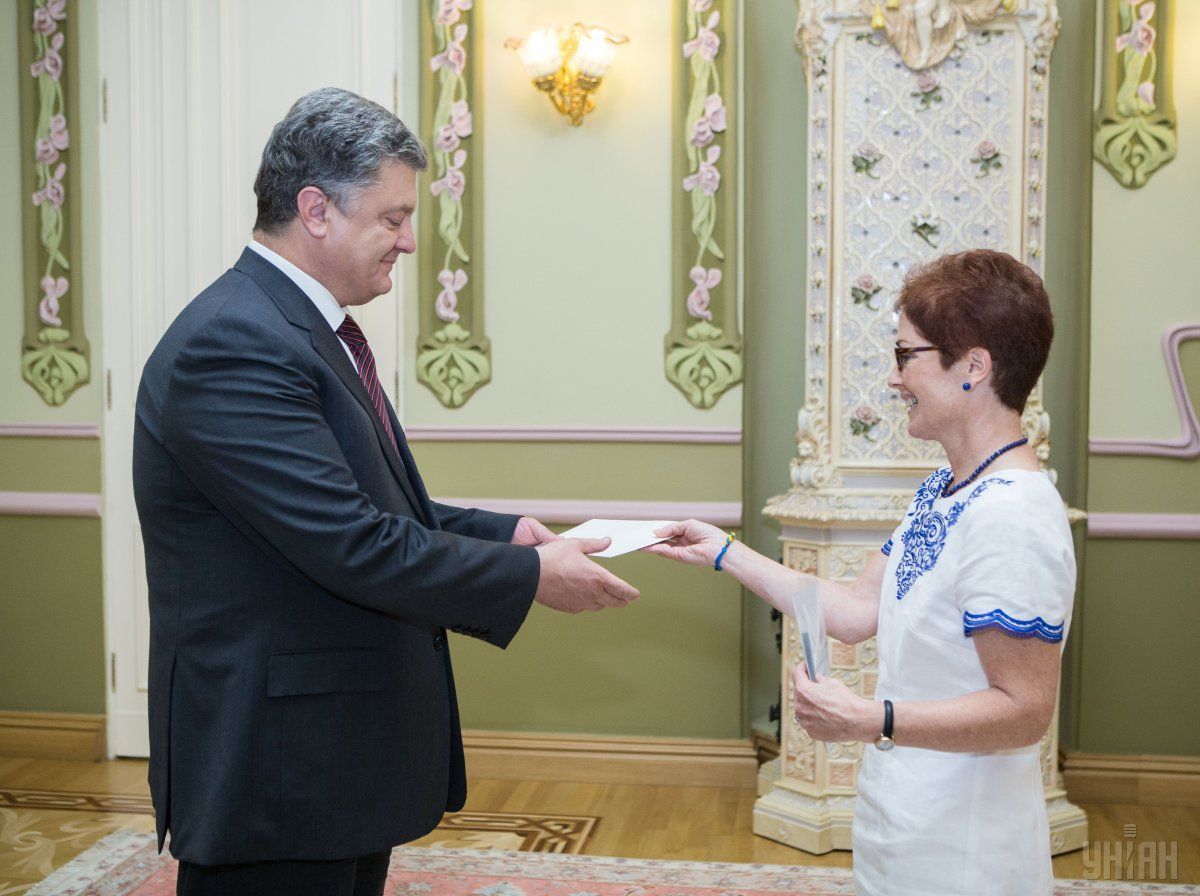 Poroshenko congratulated Jovanovic on the beginning of her mission to Ukraine, noting that he was relying on her previous experience in Kyiv in 2001-2005, the press service said.

The head of state expressed his gratitude to US for its political, financial and military-technical assistance in Ukraine's struggle against Russian aggression. "We count on further efficient cooperation," the president remarked.

Jovanovic informed the president that she was planning to preserve and enhance that support in future. "In the last two years, Ukraine has achieved significant progress, and now, we have great opportunities to continue these changes. The U.S. is a reliable friend and supports Ukraine and its reforms," she noted.

Special attention was paid to the dangerous developments in Donbas and Russia’s punitive actions in occupied Crimea.

During the conversation with the ambassador of Romania, Poroshenko cited the high dynamics of bilateral dialogue between the two countries in recent years. The Ukrainian president said he was looking forward to the visit of the Romanian president, Klaus Iohannis, to Ukraine in 2017, during the course of which the session of the Presidential Commission will take place.

Read alsoNew U.S. ambassador expected in Kyiv next weekThe head of state expressed hope that Bucharest would further promote interaction between Ukraine, the European Union and NATO. The president urged the Romanian side to start dialogues on the introduction of joint control on the Ukraine-Romania border. "It will become an instrument for the struggle against corruption. Speeding up the procedure involved in crossing the border will demonstrate trust and friendship between our nations," Poroshenko said.

During the meeting with the ambassador of Brazil, the head of state noted the importance of restoring regular political dialogue and business contacts between the two countries at all levels. He also underlined the necessity of speeding up the organization of the Ukraine-Brazil Intergovernmental Commission for Economic Cooperation. The president noted the potential for cooperation in the areas of agriculture, pharmaceuticals, nuclear energy, scientific-technical, and military-technical spheres.

Poroshenko and Ambassador of Egypt Aly discussed the importance of intensifying political dialogue and enhancing trade and economic cooperation between the two countries.

The parties confirmed their interest in holding the seventh session of the Intergovernmental Joint Commission for Economic and Scientific-Technical Cooperation by the end of 2016. Poroshenko reiterated the invitation to the president of Egypt to visit Ukraine at his convenience.