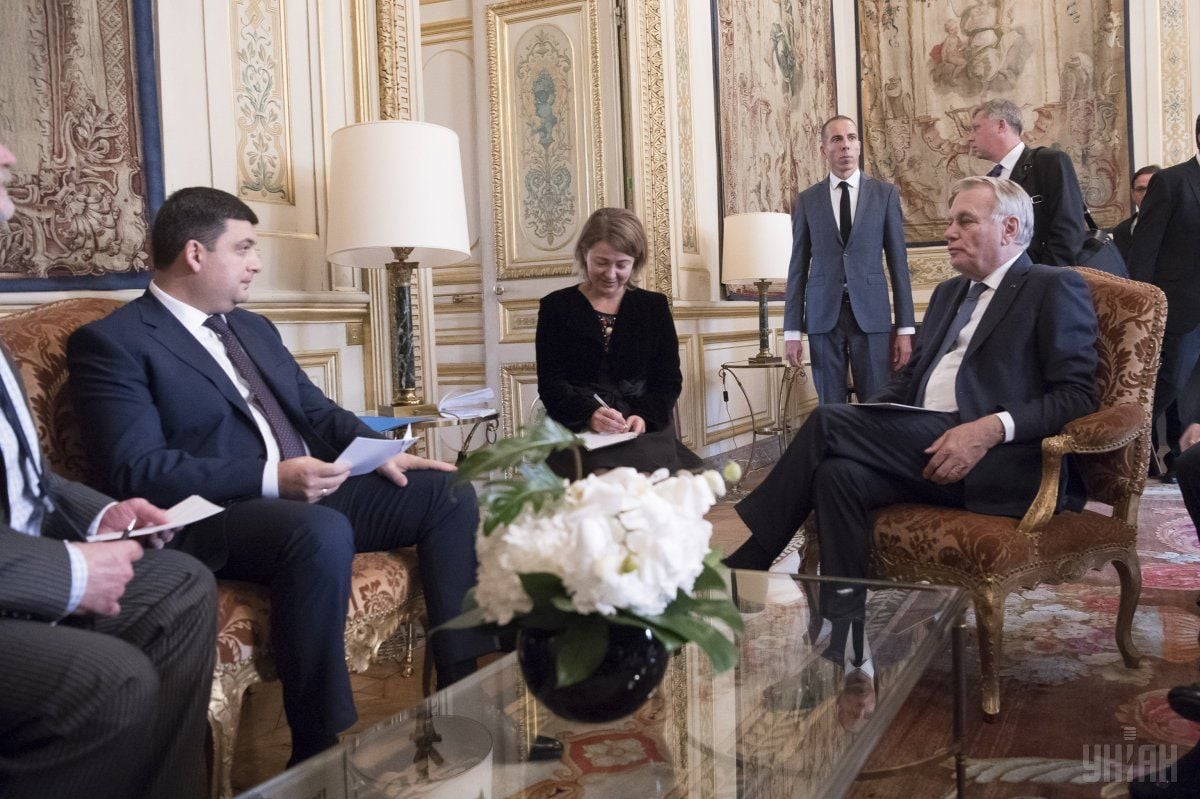 The prime minister thanked France for its assistance to Ukraine in countering Russian aggression.

"The government is interested in the comprehensive development of mutually beneficial relations with France," said Volodymyr Groysman.

The prime minister briefed the French top diplomat on the situation in Donbas. He has stressed that there is no alternative to Minsk agreements and that Ukraine unswervingly adheres to its commitments.

In this context, Groysman said that sanctions against the Russian Federation should be maintained until it fully complies with its obligations under the Minsk agreements.

Read alsoPoroshenko sums up Normandy Four talks in Berlin (full text of briefing)Continuing with the issue of temporary occupation of Ukrainian territories by the Russian Federation, Volodymyr Groysman said that the annexation of Crimea is accompanied by an accelerated militarization of the peninsula and has changed completely the security situation in the region.

"Russia actually turns Crimea into a huge military base," he said.

Read alsoPoroshenko, Erdogan condemn human rights violations in Russian-occupied CrimeaIn this context, Ukraine highly appreciates the consistent position of France regarding the non-recognition of the criminal annexation of Crimea and the Russian State Duma elections, the prime minister said. Separately, the Head of Government thanked Mr Ayrault for the initiative to set up a "roadmap" for the implementation of the Minsk agreements and proposals submitted to it, which was agreed by the Normandy Four in Berlin.

The sides also discussed the issue of the deployment of the armed OSCE police mission and demining of territories in Donbas.

Separately, the interlocutors touched upon the issues of visa liberalization.

Read alsoEU's visa waiver suspension mechanism not ready: journalistIn this context, Volodymyr Groysman said that Ukraine had fulfilled all the requirements for the introduction of a visa-free regime by the EU.

The prime minister also stressed the need to complete the ratification of the Ukraine-EU Association Agreement.

Read alsoUkraine's opaque defense sector embraces reformHe also informed the Minister of Foreign Affairs of France Jean-Marc Ayrault on the reforms launched by the Ukrainian Government and first achievements along the way.