Yanukovych says incumbent government to work only till April 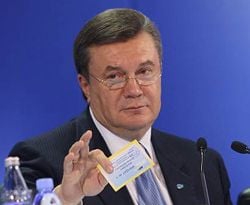 Leader of the Party of Regions faction Victor Yanukovych forecasts that the incumbent Cabinet of Ministers will work only till April.

According to an UNIAN correspondent, he said this speaking to a session of the oppositional government on Friday. In particular, he pointed out that the current government “has just two months – January and February”. “March will be their last month”, V.Yanukovych said.

According to his opinion, in the Verkhovna Rada of Ukraine, there is no coalition, but there are merely 214 parliament members who united to help Yulia Tymoshenko keep the Prime Minister`s job. According to his words, the Party of Regions should do it`s best to relegate this power as soon as possible.

He noted that the government`s program of actions "The Ukrainian Breakthrough" – is “an absolutely populist program”.