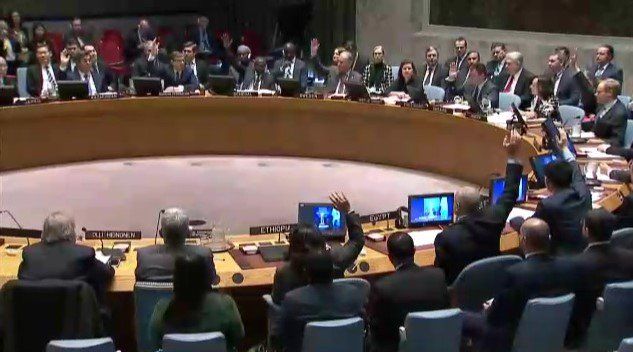 This is "the first resolution in the history of the UN Security Council on the protection of critical infrastructure against terrorist attacks," it says.

The resolution is aimed at improving the effectiveness of international efforts to counter terrorist attacks on critical infrastructure, in particular, in the framework of the UN Global Counter-Terrorism Strategy.

Read alsoPACE condemns Russia for terrorist activities in Ukraine - LohvynskyThe document is designed to "ensure criminalization of acts of terrorism aiming to either destroy or disrupt the operation of critical infrastructure."

"The protection of critical infrastructure is vital to national security, public safety and the economic development of all states. Terrorist attacks on these facilities and services can significantly disrupt the functioning of societies and bring about massive human suffering," Ukrainian Minister of Foreign Affairs Pavlo Klimkin said at the open debate on the resolution at the UNSC meeting.

"This resolution sends a strong message from the Security Council to the international community to give serious consideration to this issue," he said.

In his words, it also outlines a specific framework of objectives and actions aimed at raising awareness of possible terrorist threats to critical infrastructure. It does this by identifying the threats and preventing them as well as alleviating their possible consequences.

Also among the elements of the resolution are measures to raise member states' awareness of terrorist threats; strengthen the resistance of critical infrastructure to terrorist attacks, enhance the public and private sectors in countering terrorist threats, strengthen international and regional cooperation, facilitate the open exchange of information between all members and law enforcement agencies.

Critical infrastructure systems include banking and finance; telecoms; emergency services; air, maritime and rail transportation; and energy and water supplies. Attacks on these systems can cause chaos in societies, along with loss of civilian life, destruction of property and disruption of public services. There may also be environmental consequences that can extend beyond the targeted state, affecting neighboring countries.