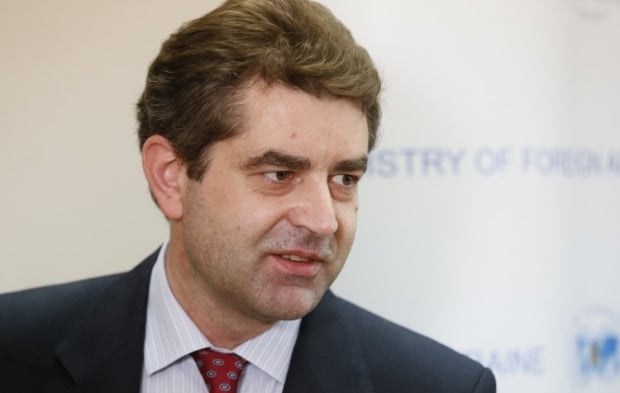 The effects of propaganda are like the use of weapons of mass destruction, Perebyinis said, the Prague Daily Monitor wrote.

Ukraine is the first victim of the information war that poses a threat to all countries alike, he added.

Perebyinis said the attention of the international community recently focused on the war in Syria and the struggle against Islamist terrorism, but still he believes that the support for Ukraine continues.

"Actually, this is a very dangerous weapon of mass destruction, but its effect differs from that of an atomic bomb or chemical weapons," Perebyinis said.

"Thanks to the weapon, which is propaganda, Russian society is fully controllable by the Kremlin," he added.

Perebyinis warned of the operation of Russian information channels in other countries.

"I think that the threat of Russian interference in the internal affairs of other countries is very strong and urgent. I do not know any country that may not feel threatened," he added.

The Ukrainian experience should be a memento for Europe, Perebyinis said.

In connection with the continuing conflict in eastern Ukraine and annexation of Crimea, false information disseminated by Russia has appeared in the public space, he added.

"After Russia started its aggression against Ukraine and occupation of our territory, we had to adopt a tougher stance. We must not allow television channels to help Russians wage a war against the Ukrainian nation," Perebyinis said.

Read alsoMeasures on countering Russian propaganda in Europe must strengthen – KlimkinLimiting the influence of propaganda is complicated because this demands an intervention in the free operation of the media, he added.

Perebyinis said it was a task for experts to come up with suitable instruments with which to prevent the abuse of the media to spread propaganda.

He said Ukraine had banned the operation of some media outlets by court decisions.

"This is a very strong threat and in my personal view, Europe should think of this," Perebyinis said.

For all the problems it is facing now, the EU is still a crucial ally and model of Ukraine, he added.

For Kyiv, the support for anti-Russian sanctions, in particular, is vital, Perebyinis said.

They were imposed by European countries and the USA due to the Russian annexation of Crimea and support for pro-Russian separatists in eastern Ukraine in 2014.

Perebyinis said it was a pity that one could hear the voices demanding their lifting in Europe.

Czech President Milos Zeman is an opponent of the sanctions.

"We are sorry that some foreign politicians are starting to say the sanctions have not solved anything," Perebyinis said.

"Naturally, some are harmed by the existence of the sanctions, but if we are part of the civilized world, we have to insist on some values," he added.

Lifting the sanctions is like a situation where a criminal was found guilty, but they will not go to the prison because they would not be reprieved anyway, Perebyinis said.

"I hope that the sanctions will remain in force until Russia leaves Donbas and withdraws from Crimea," he added.

If you see a spelling error on our site, select it and press Ctrl+Enter
Tags:RussiaUkraineEuropepropaganda