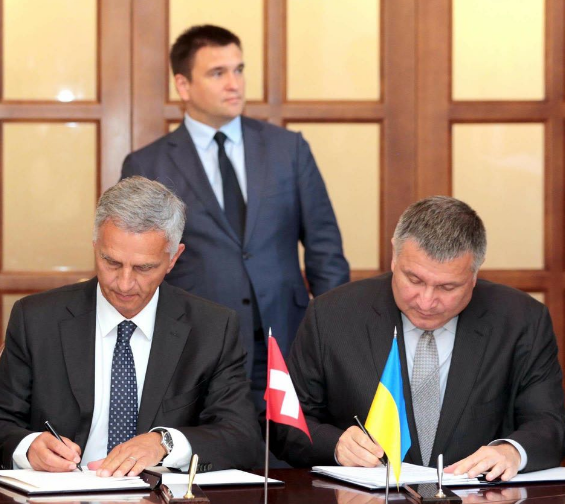 "Together with [Ukraine's Foreign Minister] Pavlo Klimkin we have signed on behalf of Ukraine the treaties on visa-free regime and readmission with Switzerland. Europe keeps getting closer!" Avakov said.

In turn, Ukrainian Foreign Minister Pavlo Klimkin said at a joint news conference with the head of the Swiss Federal Department of Foreign Affairs Didier Burkhalter in Kyiv that Ukraine and Switzerland had settled the issues of the visa-free regime since June 11.

According to the minister, this is a separate agreement on simplifying the crossing of the Swiss border by those Ukrainians who have not yet obtained biometric passports.

"I have signed a visa facilitation agreement with Didier. You know that we will have a visa-free regime with Switzerland from June 11, but now we have also settled all issues in such a way that we have clear visa rules with Switzerland, including for categories that receive visas for free, for those who do not have biometric passports yet, or, for example, how visas are provided to media representatives," Klimkin said.

"That is, we have settled this at the same level as it works with us with the European Union," the minister said.

He also said that Ukrainian Interior Minister Arsen Avakov had signed an agreement on readmission.

If you see a spelling error on our site, select it and press Ctrl+Enter
Tags:UkraineKlimkinAvakovSwitzerlandreadmission