Yushchenko says that he takes lead by one step 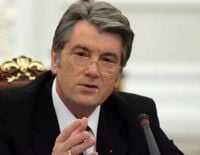 The President of Ukraine promises to tell about his decision concerning participation in future presidential election in summer. He said this in the interview to Delo newspaper and Hospodarske noviny Czech daily newspaper.

For the question of correspondent “What do you feel, knowing that four years ago you were a national hero and now your popularity fell considerably? (according to some data, it fell up to 2%”, the President answered: “I will not comment the percents, but I understand that a politician, who tells about Stalin’s terror and Holodomor (the Great Famine), visits Brussels every month and promotes the membership in NATO, will not gain the points of popularity. But if I look at those four years, during which I have been taking this post, I see that Ukraine changed noticeably. Four years ago we dreamt about agreement on partnership with the European Union, as of today we have already formed an agreement on associate membership. Four years ago we dreamt about joint energy market, now we talk about creation of united energy system in one-two years. We have already prepared two thirds of agreement on free trade zone. Two years ago we agreed on new visa regime with countries of Schengen zone and three months ago we started negotiations on free visa regime. Ukraine became noticeably closer to Europe during four years. A politician has to take lead by one step, though not everybody will understand him at once. I am happy to live during this time”.