Putin is setting an elephant trap for Merkel - The Times 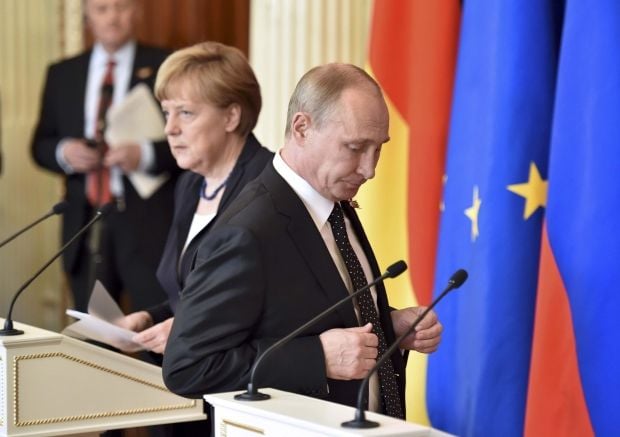 It was the Kremlin chief who offered him a lucrative job running the Nord Stream 2 gas pipeline project shortly after he had been kicked out of office by German Chancellor Angela Merkel, The Times reports.

Now Schroeder is about to join the board of the Russian oil giant Rosneft, on which the U.S. imposed sanctions this year. It is run by Igor Sechin, a hard-boiled operator said to have strong ties to the security services and to be Putin’s closest ally. Schroeder, in other words, is being welcomed into the Kremlin court. The move is supposed to guarantee heightened Russian influence within the EU at a time when Putin is losing faith with the Trump administration.

Russian energy policy used to be about forging strategic links with states such as Germany, France and Italy, beating off commercial competition and using gas in particular as political leverage over smaller states in central Europe and the Balkans. Today, though, the picture is more confused and for Putin as international sanctions are hurting Russia.

Read alsoNord Stream promoted by KGB, Stasi’s former agents - journalistAs for Gazprom, the Russian gas producer, it retains a 34% share in the EU energy market but is facing a hostile European Commission that has made security of supply a priority. Liquefied natural gas from the U.S., which is just starting to arrive in Poland and The Netherlands, may not displace Russian gas but it will push down Russian prices.

Putin is addressing these problems in two ways. First, he wants to divide the U.S. and Europe over the issue of sanctions on Russia. There had been hopes that the Trump administration would lead the way in easing restrictions but the President, mired in allegations of his aides’ collusion with Russia, is in no position even to smile at Moscow.

Second, Putin aims to persuade Europe that energy security means reliable and affordable supply rather than having to do the political bidding of Moscow. It will take some doing to persuade countries like Poland that this is true. The dependency of Balkan states on Russian gas, and the not-so-subtle influence Moscow exerts on local decision-making, has been noted by Western intelligence analysts.

Read alsoGermany's Schroeder Dismisses Criticism Over Accepting Rosneft PostSchroeder can play a part in both aims. For him, and indeed for the current German government, U.S. ideas about arming Ukrainian forces are beyond the pale. They would, in the German view, destabilize the whole of eastern Europe. Germany quietly agrees with Putin’s scepticism about the White House’s intentions and its unpredictability. Trump is thus driving Germany and Russia closer. The foreign bugbears of this year’s German election campaign have been Turkish President Recep Tayyip Erdogan and Donald Trump. Putin barely gets a mention.

In June, Putin invited Schroeder and German Foreign Minister Sigmar Gabriel to a lavish dinner in St Petersburg. It is unclear whether they discussed Ukraine but soon afterwards Gabriel said a new Russian peace plan should be taken seriously. He also called the Russian land-grab of Crimea in 2014 “unconstitutional” — surely the mildest way of describing an annexation.

Read alsoNo compromises on Ukraine’s sovereignty over Crimea – Ukraine’s envoy to EUThe supposed plan, involving the deployment of UN peacekeepers, is intended to do no more than freeze the conflict to Moscow’s advantage and steal some of the thunder from Ukraine, which will use this week’s UN general assembly to put forward its own ideas.

Putin, an admirer of German virtues since his KGB days in Dresden, seems to believe the country can become a special partner after Merkel’s presumed re-election this month and his own re-enthronement next year.

Read alsoWhat Russian "peacekeepers" wantThe relationship may not have the same intimacy as the one he enjoys with Schroeder but it will nonetheless be an attempt at a reset. He will offer a scaling-down of the Ukrainian crisis in return for the lifting of EU sanctions on the Russian energy sector. Schroeder and his Social Democrat chums in Berlin think that would be a reasonable deal. Merkel, though, would be well advised to look out for the elephant trap.

If you see a spelling error on our site, select it and press Ctrl+Enter
Tags:RussiaUkrainePutinUSAMerkelGermanyNordStream2geopoliticsSchroeder