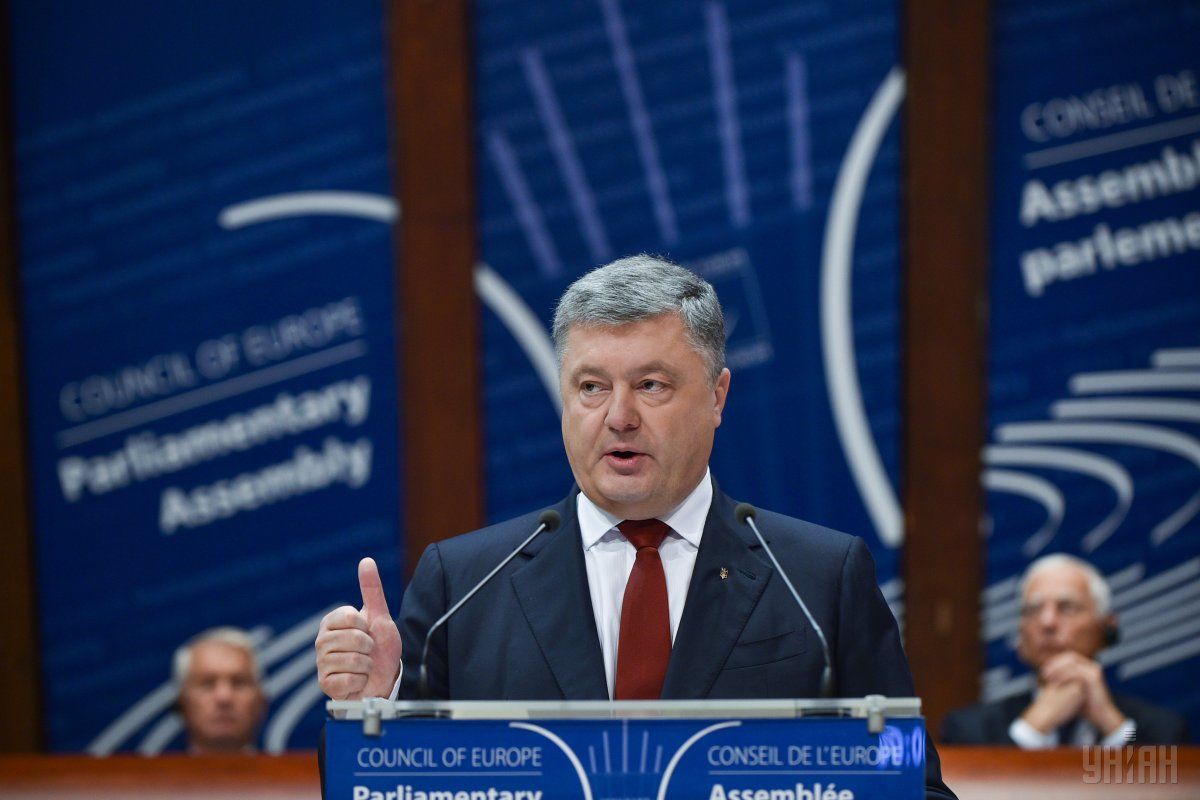 Addressing PACE, the head of state emphasized that Ukraine counted on the Assembly’s further support as regards the strengthening of civil society in Ukraine based upon the implementation of the democratic standards, support of cultural diversity and the build-up of social institutions.

“In this regard, I would like to draw your attention to unreasonable politicisation of the Law on Education. My stance on education is clear. The quality of education determines the nation’s future and security. Therefore, this area should be reformed. Apart from being a significant part of the educational reform, the adopted Law has become the law of equal opportunities for each stakeholder in education system,” Petro Poroshenko noted.

The Head of State emphasized that the given law had created equal opportunities for all pupils, regardless of their origin, residence or nationality.

Read alsoRussia would not have attacked Ukraine had Kyiv not abandoned nuclear arms - Poroshenko“It is unacceptable that the children, belonging to national minorities in Ukraine, do not have adequate knowledge of the Ukrainian language, which is needed for further education in universities, professional career, self-realization in Ukraine,” Petro Poroshenko emphasized.

According to him, the law is to fix this problem. “The Parliament of Ukraine has envisaged the improvement of learning Ukrainian at the level of pre-school and primary education with a view to creating conditions for studying in the official language at the higher levels. At the same time, the law safeguards the right to learn native language at the required level,” he stressed.

The President reminds that the European Charter for Regional or Minority Languages, which was adopted here in Strasbourg 25 years ago, stipulates that all commitments related to the national minorities should be implemented “without prejudice to the teaching of the official language(s) of the State”. I believe that the provisions of this Charter should be applied by all the signatories, as stated by Petro Poroshenko.

“Let me reassure you that we will guarantee the language rights in accordance with the national legislation and international commitments and standards, including the right to study in native language. At the same time, we will provide adequate learning of the official language, which is Ukrainian,” the Head of State noted.

Read alsoPACE appoints Herkel rapporteur on Ukrainian law on education – mediaHe added that the best proof of this commitment was the decision to submit the respective article for assessment of the Venice Commission. “I believe that its conclusions will lift all controversial interpretation of this law, which is aimed, in fact, at ensuring a decent place for all the national minorities in the integral Ukrainian society,” the President said.

Read alsoPACE to debate on Ukraine's education law Oct 12Answering the question of the attendees, Petro Poroshenko emphasized that the education system in Ukraine demanded reform. “Can you imagine that 75% of school graduates in Berehove (Zakarpattia region) failed to pass the Ukrainian language test. They simply do not understand the language,” the Head of State noted. He added that because of this, those children would not be able to get a job, use government services, or continue their education in Ukraine.

“This is discrimination against these children,” the Head of State stressed. He emphasized that the state is not against the national minorities’ languages in any way. “They are welcome to learn these languages. We created such an opportunity. The only thing we ask - please, study Ukrainian. This is the protection of these children from discrimination,” the President noted.

Read alsoKlimkin invites EU ambassadors to Zakarpattia region over Hungary's position on education lawThe Head of State once again emphasized that Ukraine was fully open in this issue and had submitted the draft law to the Venice Commission. “We are ready for dialogue,” the President said, adding that the Ukrainian party was ready to implement the results of the conclusion by the Venice Commission in the draft law on secondary education.

If you see a spelling error on our site, select it and press Ctrl+Enter
Tags:PoroshenkoUkrainePACEreformlanguageeducationlawnationalminorities