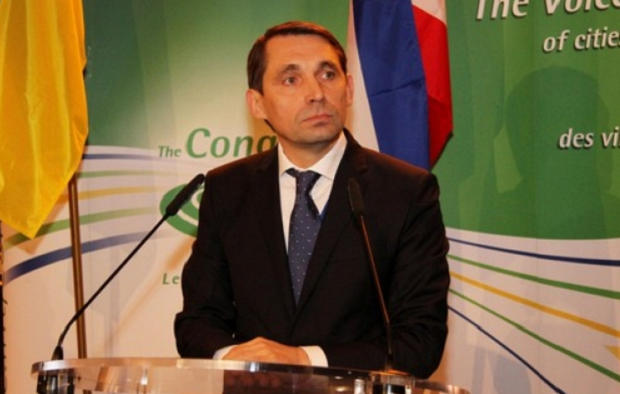 Amid widespread speculation around the new Ukrainian legislation, Tochytskyi writes in his column for Euroactiv that its purpose is, in fact, to bring Ukrainian education system closer to the EU standards and provide equal opportunities for all.

"The only concern of some of our partners is arising from its Article 7, which intends to improve knowledge of Ukrainian language (according to the Constitution, the only state language of Ukraine) by all graduates of state-funded and communal schools at the same time guaranteeing free development and use of native languages by national minorities in Ukraine," the Ambassador wrote.

Read alsoHungarian defense minister avoids answering question on Budapest using NATO as blackmail toolThe inaccurate information on the law has been used to mislead international community on the issue of the rights of national minorities in Ukraine, according to Tochytskyi. "Moreover, some politicians have dared to use this pretext to undermine the territorial integrity of my country and claim for 'self-determination for Transcarpathian [Zakarpattia] region of Ukraine'," the opinion says.

The legal analysis concludes that the Law “On Education” complies with the bilateral international agreements of Ukraine [in particular the Treaty between Ukraine and  the Republic of Hungary on the Foundations of Good Neighbourly Relations and Co-operation of 1991 and Ukraine-EU Association Agreement] as well as obligations under key multilateral instruments in this sphere – namely the European Charter for Regional or Minority Languages, the Council of Europe Framework Convention for the Protection of National Minorities, Document of the Copenhagen Meeting of the Conference on the Human Dimension of the Conference on Security and Cooperation in Europe of 1990, the Paris Charter for a New Europe of 1990 etc., the Ambassador stresses.

Neither does the Law contradict Ukraine's political commitments under the Copenhagen Сonference’s Document to ensure proper opportunities for a national minority to learn its language and to study in its language, according to Tochytskyi.

Read alsoBulgarian minority in Ukraine approves of new education law in UkraineThe Association Agreement does not cover the issue of education in national minorities’ languages at all. On the other hand, under the Framework Convention Ukraine has committed to creating the necessary conditions for the effective participation of persons belonging to national minorities in cultural, social and economic life and in public affairs. In this context, the knowledge of state language of Ukraine is a prerequisite for ensuring such an effective participation.

"By adopting this law, we do not violate the rights of national minorities. Instead, we broaden their opportunities for learning Ukrainian. Without proper knowledge of the state language, a Ukrainian citizen will not able to enter Ukrainian universities, is not eligible for public service or for public offices in the self-government bodies," Tochytskyi says.

According to official stats, children studying at national minority schools have fewer opportunities than their Ukrainian-speaking peers due to their poor knowledge of Ukrainian language.

In 2016 60.1% of school students, who belong to the Hungarian and Romanian minorities and who compiled the External Independent Testing (EIT) on Math and History of Ukraine in one of these languages, flunked the Ukrainian language test.

Read alsoPoland not to support Hungary’s protest against Ukraine’s education lawMoreover, the data proved that in western regions many Ukrainian citizens belonging to national minorities do not master the Ukrainian language at all. Thus, those people cannot realize their constitutional rights, in particular for employment and higher education.

To show a constructive approach and transparency, Ukraine submitted the respective Law for assessment of the Venice Commission. Furthermore, during his recent speech in Council of Europe Parliamentary Assembly, President of Ukraine Petro Poroshenko stressed Ukraine's commitment to properly implement its respectful recommendations.

"Meanwhile, we are ready to hold consultations with all interested international partners on bilateral and multilateral levels in order to develop mechanisms for an appropriate implementation of this framework legislation. Most of our partners agreed for a bilateral dialogue on the issue," wrote the envoy.

"Some of them have already acknowledged that the new Law would provide more opportunities for the national minorities. But only one of them continues escalation of rhetoric, is using the tactics of blackmailing, threatening to block our European initiatives and even challenging the Association Agreement defended by more than ten thousand lives of Ukrainian citizens. This way of talking will lead us to nowhere," he wrote.

Read alsoUkraine, Poland sign deal on national minorities' language of instructionTochytskyi concludes: "It is high time to stop politicizing the matter and instead to sit down together for a professional talk to dispel myths and misinterpretations. Knowledge of the official language of the state is an asset for representatives of the national minorities, but in no way a violation of their rights. It opens more opportunities for integration into the society and enriches their cultural, social and economic life."

If you see a spelling error on our site, select it and press Ctrl+Enter
Tags:UkraineHungaryelectionsTochytskyieducationlawnationalminorities