Volker and Surkov can meet again by year-end – Russian media 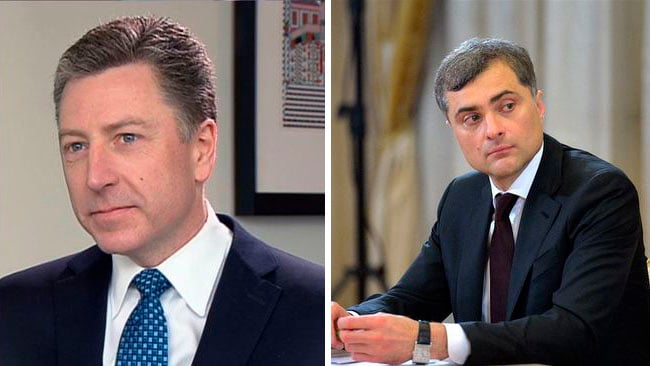 "A recent meeting of Surkov and Volker in Belgrade has not shut down the possibility of further contacts, further discussion on settlement prospects. Certainly, these contacts will continue, and I would not rule out the possibility of a new meeting before the end of the year," the diplomat said on Thursday, November 16, TASS said.

The most recent meeting of Surkov and Volker focusing on peace settlement in Donbas was held in Belgrade, Serbia, on November 13.

"We thoroughly discussed the Russian initiative on the deployment of a UN mission to Ukraine," Surkov said after talks.

"Our American friends presented their proposals concerning our Security Council draft resolution, which contained 29 paragraphs. Our delegation came to the conclusion that three of them were acceptable. Not a lot, really. But three is not zero. It's better than zero," Surkov said then.

According to Surkov, the parties decided to continue the work to bring their positions closer.

This was a third meeting between the Russian and U.S. representatives held in 2017. Surkov and Volker earlier held talks in the Belarusian capital of Minsk on August 21 and in the Serbian capital of Belgrade on October 7.

As UNIAN reported earlier, Ukrainian President Petro Poroshenko on September 20 appealed to the UN Security Council on the deployment in Donbas of a peacekeeping mission. Speaking at the general debate of the 72nd session of the UN General Assembly, he stressed that the UN peacekeeping force should be deployed throughout the entire territory of the occupied Donbas, including the Ukrainian-Russian border.

In turn, Russia has declared that a full-fledged peacekeeping operation in the occupied Donbas is unacceptable from the point of view of Minsk agreements, and insists that UN peacekeepers should be deployed only along the line of demarcation between the warring sides to ensure the safety of the OSCE Special Monitoring Mission observers.

If you see a spelling error on our site, select it and press Ctrl+Enter
Tags:RussiaDonbasUSAoccupationSurkovVolker