Euromaidan's anniversary: The Revolution of Dignity in flashback (Photo, video) 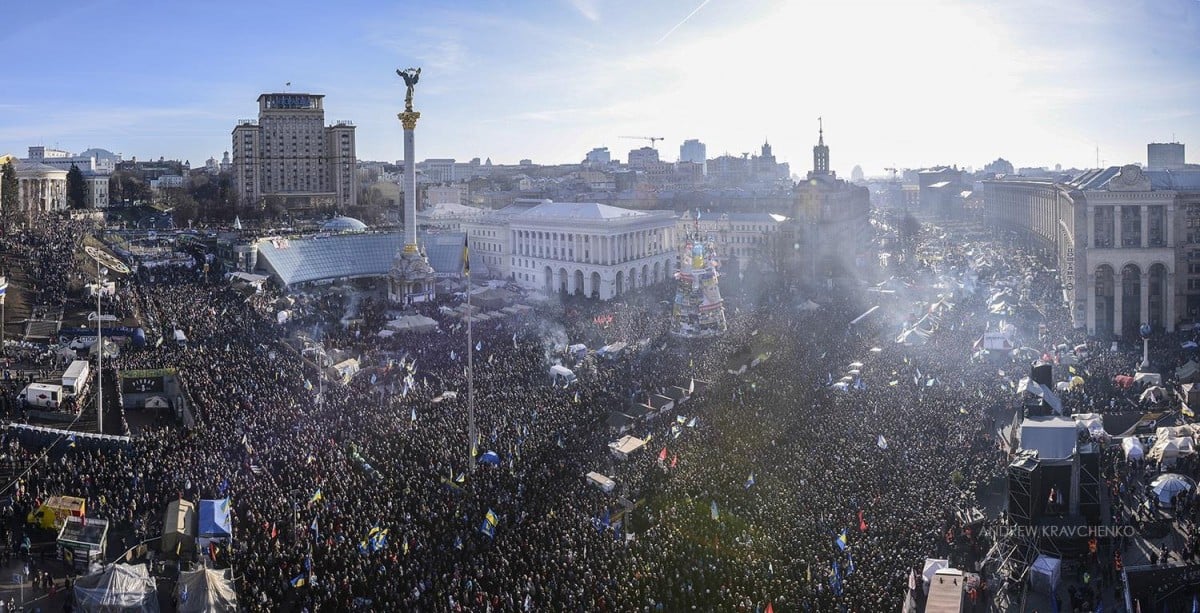 The causes of Euromaidan

Four years ago on November 21, Ukraine's Cabinet of Ministers headed by the then Prime Minister Mykola Azarov passed a resolution to suspend the signing of the Association Agreement with the EU, which was to take place at the Vilnius Summit of the Eastern Partnership on November 28-29.

The failure of the deal was preceded by assurances from the government and the then President Viktor Yanukovych that in order to move to European standards, as required by the Association Agreement, Ukraine would need several hundred billion euros in the coming years (the latter figure called was EUR 160 billion). And for the resumption of the European integration process, the then Ukrainian government demanded that the EU compensate this amount. But as a "cheap" alternative to rapprochement with the EU, Yanukovych's regime offered Ukraine's accession to the Customs Union with Russia.

Therefore, referring to these expenses, on November 21, a week prior to the Vilnius Summit, Azarov's government made an unexpected decision to give up the deal with the EU, which, along with flourishing corruption and low standards of living, caused public outrage and triggered a wave of mass protests throughout the country.

The beginning of protests

Over 1,000 people gathered on the Maidan Nezalezhnosti Square in Kyiv in the evening that very day. Some politicians representing the opposition also joined the protesters. On the same day, Kyiv's District Administrative Court banned public events downtown Kyiv until January 7, 2014. It should be noted that such court rulings, especially regarding political actions planned by the opposition, were regular under Yanukovych's rule. In addition to Kyiv, protests were staged in Ivano-Frankivsk, Donetsk, Khmelnytskyi, Lviv, Uzhgorod, and Lutsk. Social networks and the media dubbed the protests "Euromaidan" with the same hashtag.

Despite the court's ban, the number of people in Kyiv began to grow the following day, and several thousand had gathered by the evening of November 22. The same evening, the first serious clashes were reported between law enforcement officers and protesters, when the latter tried to set up tents. 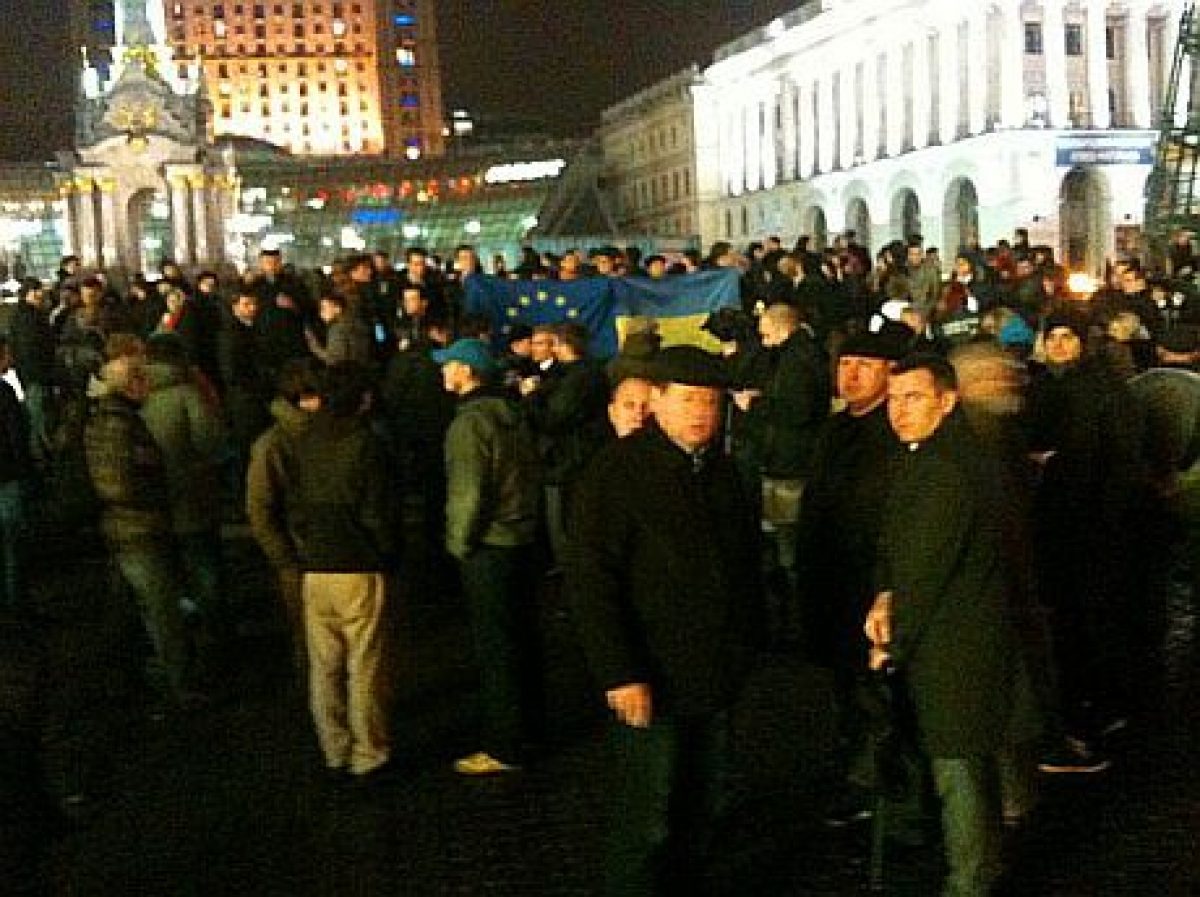 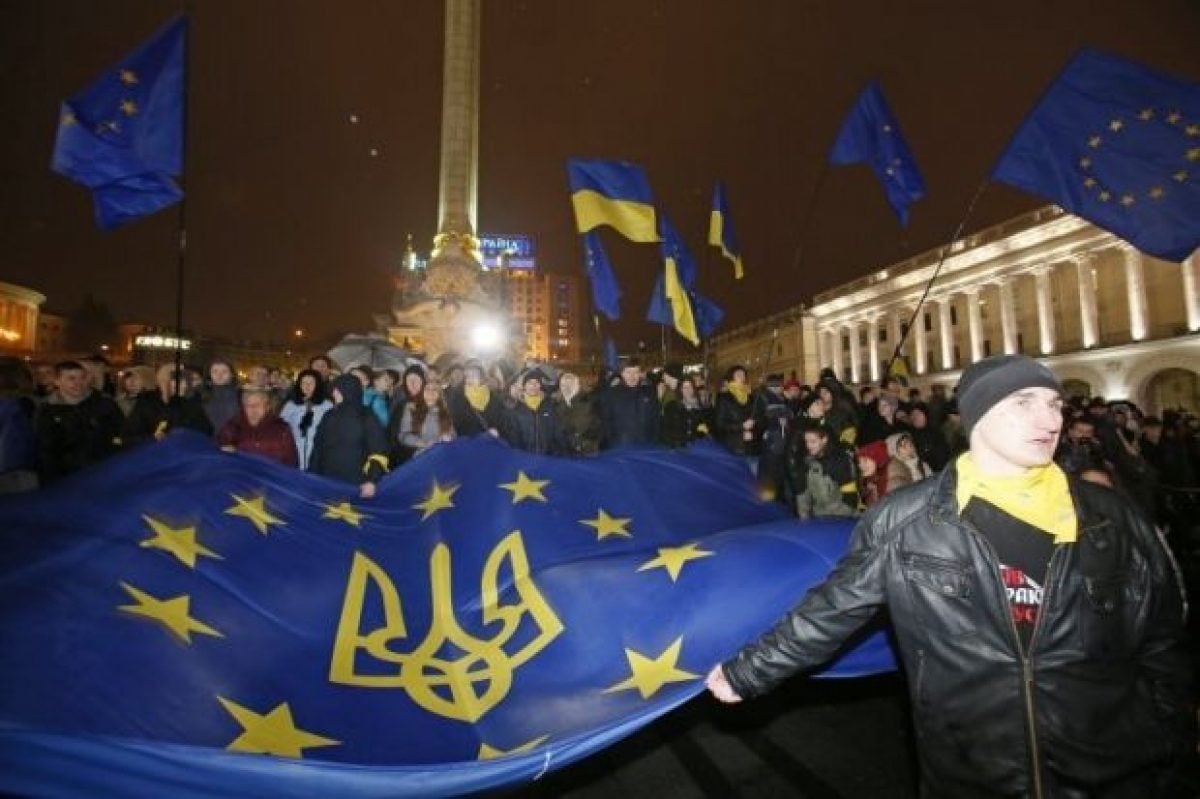 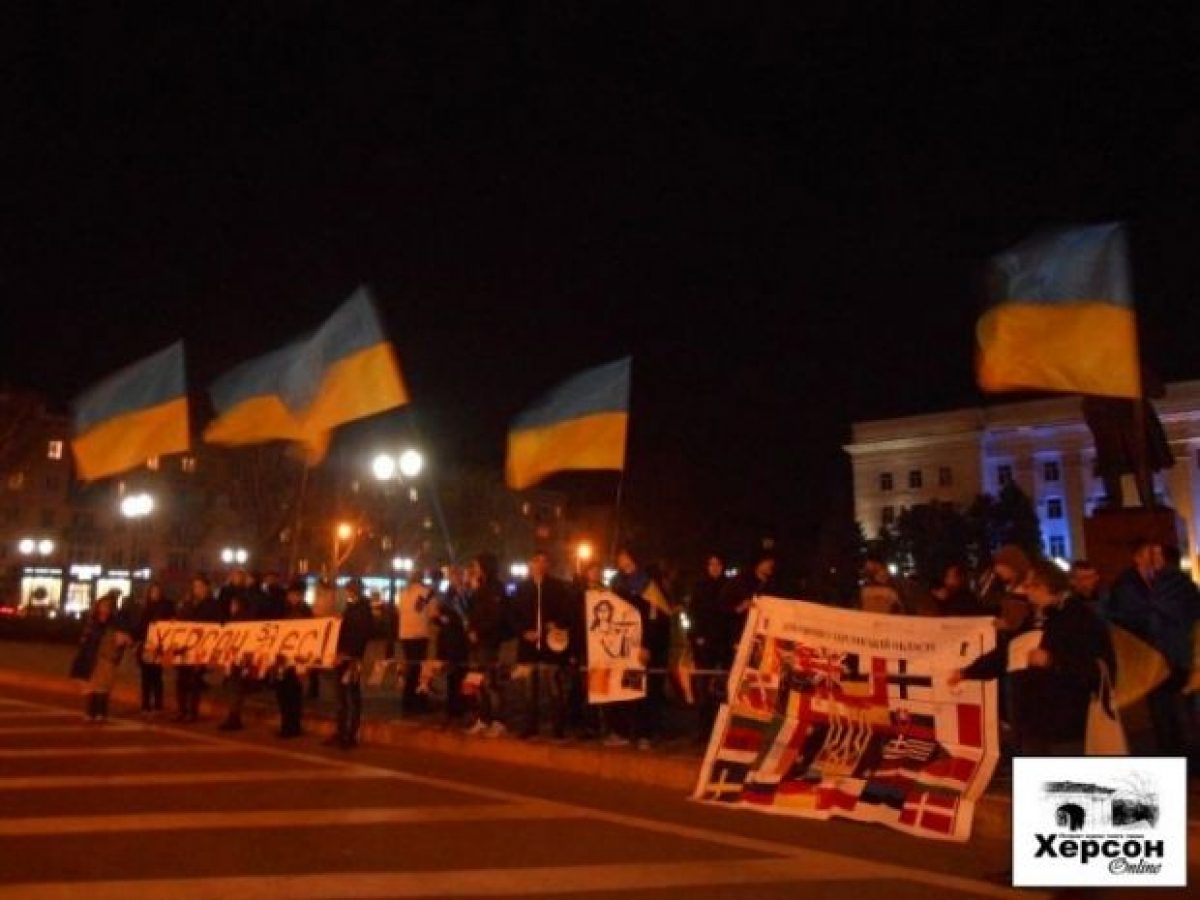 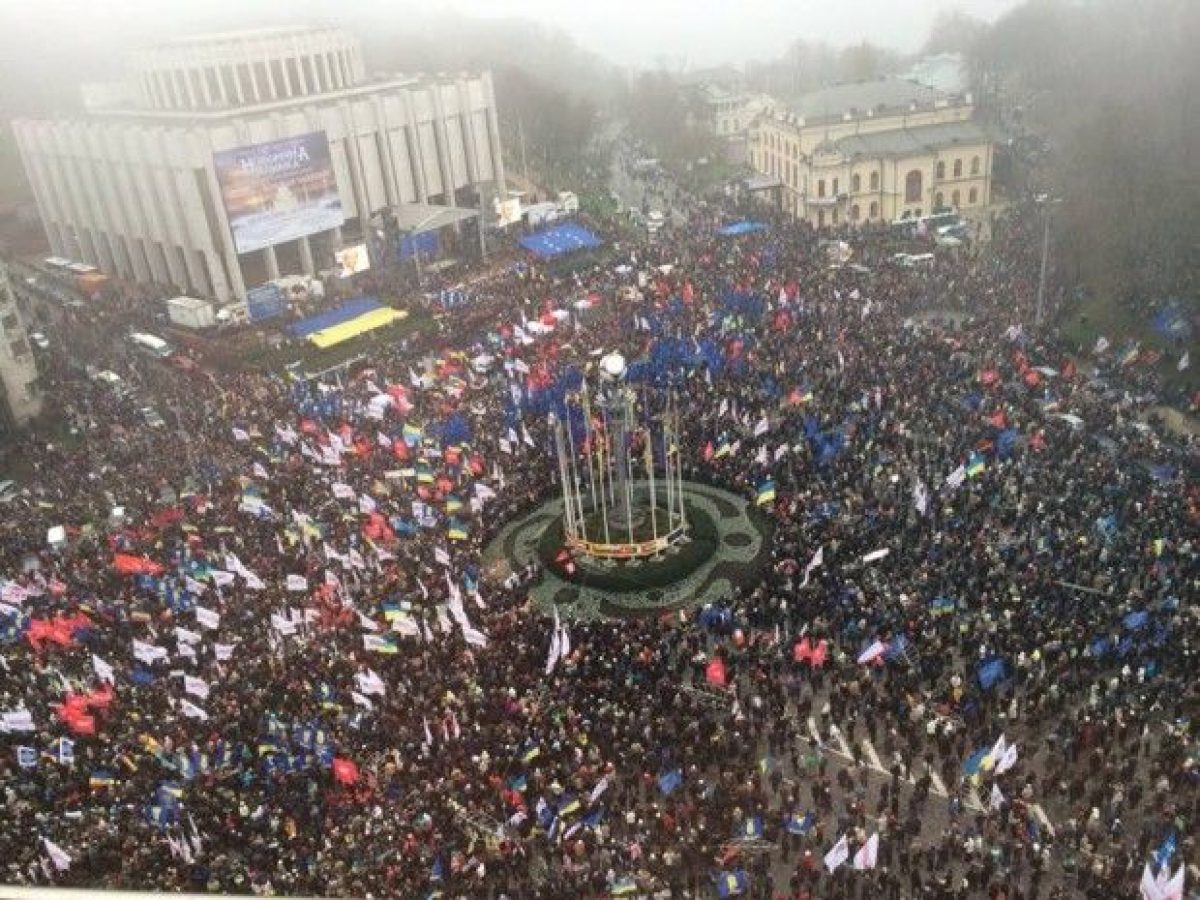 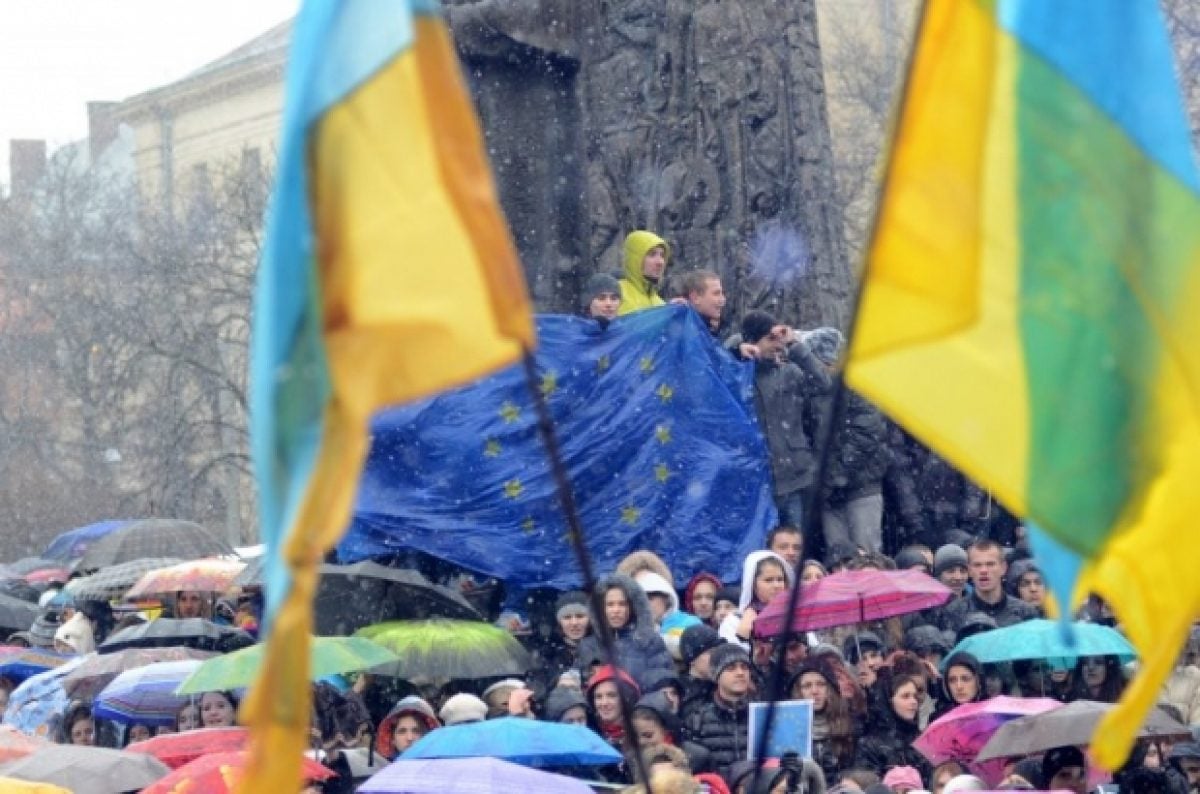 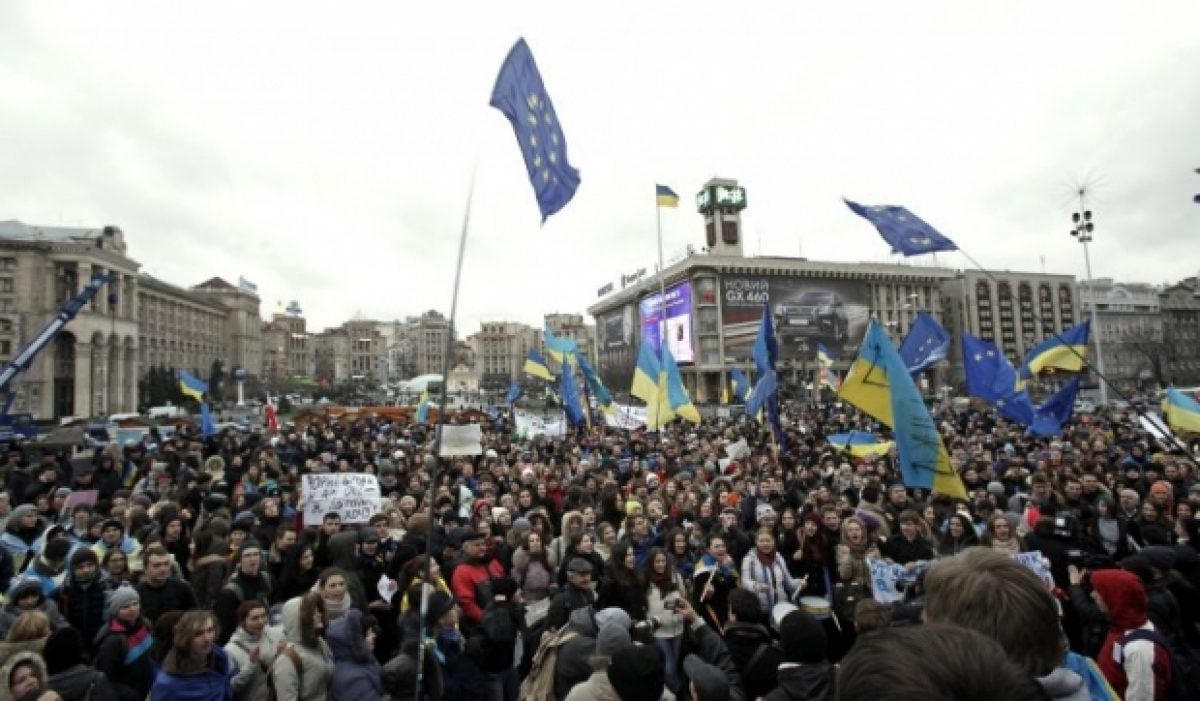 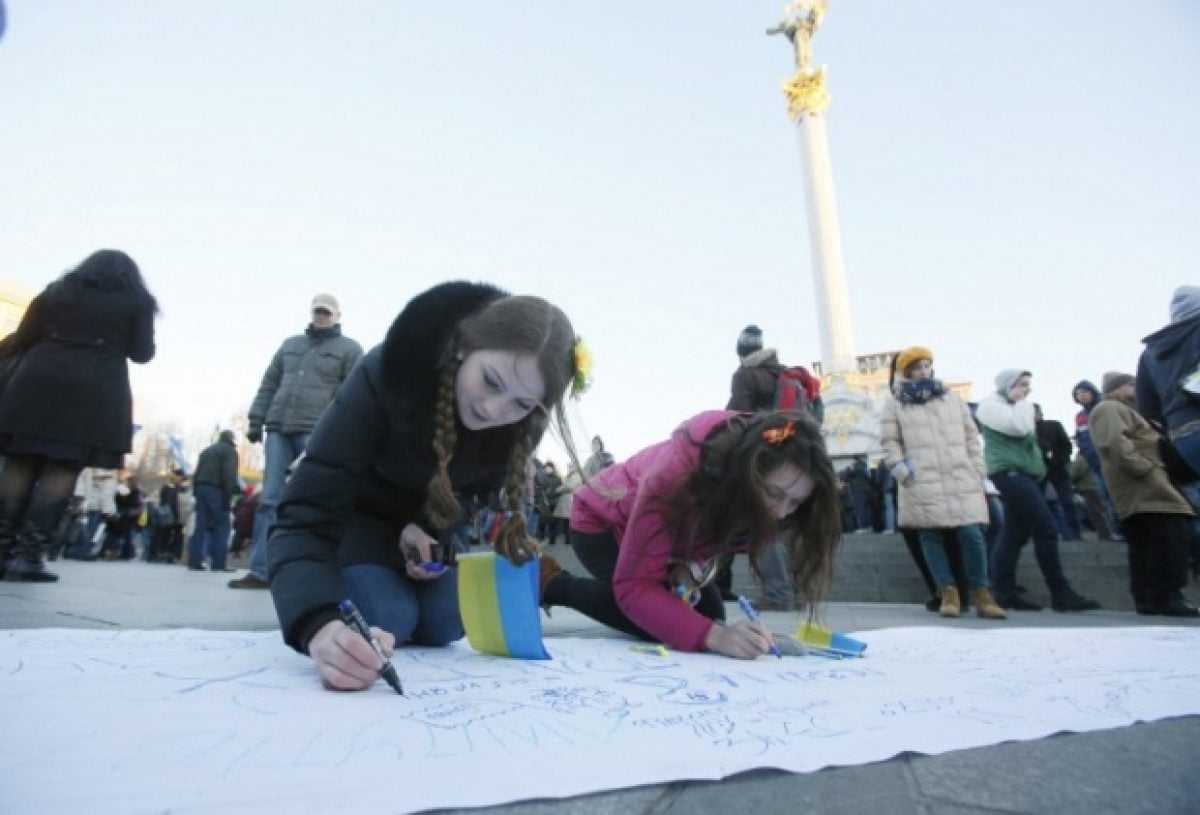 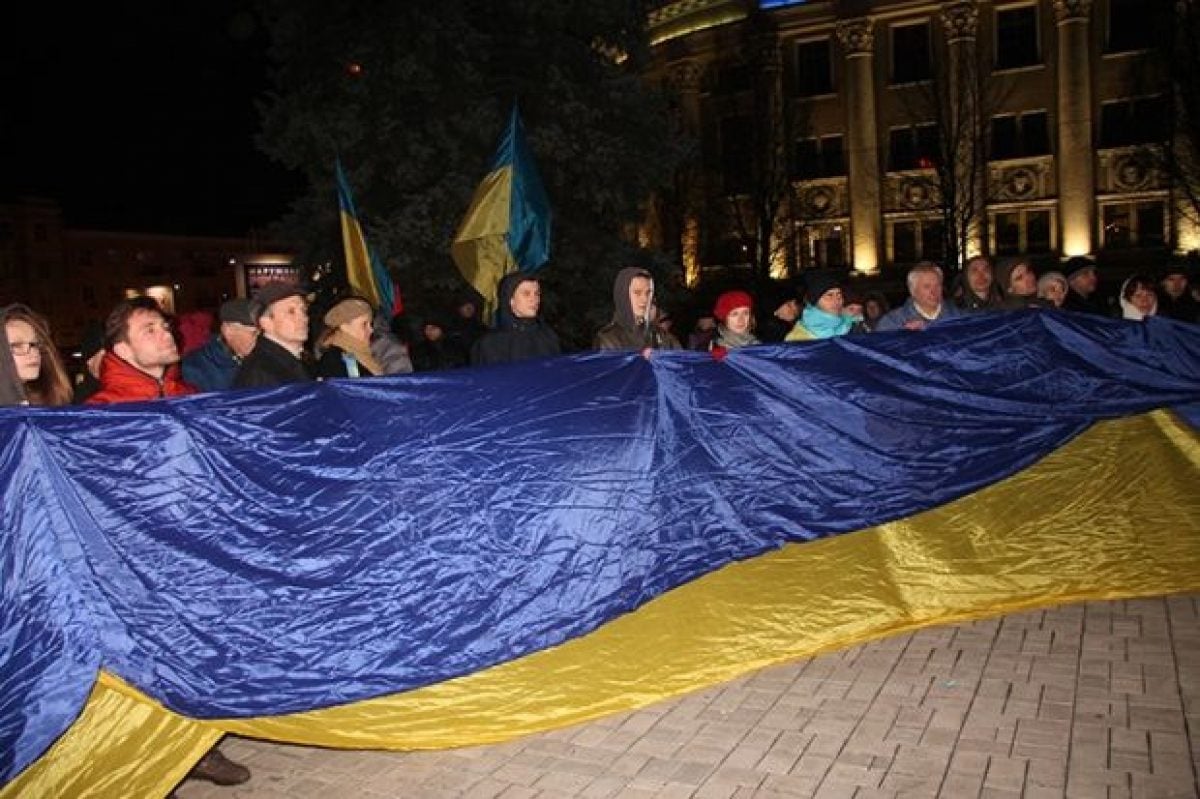 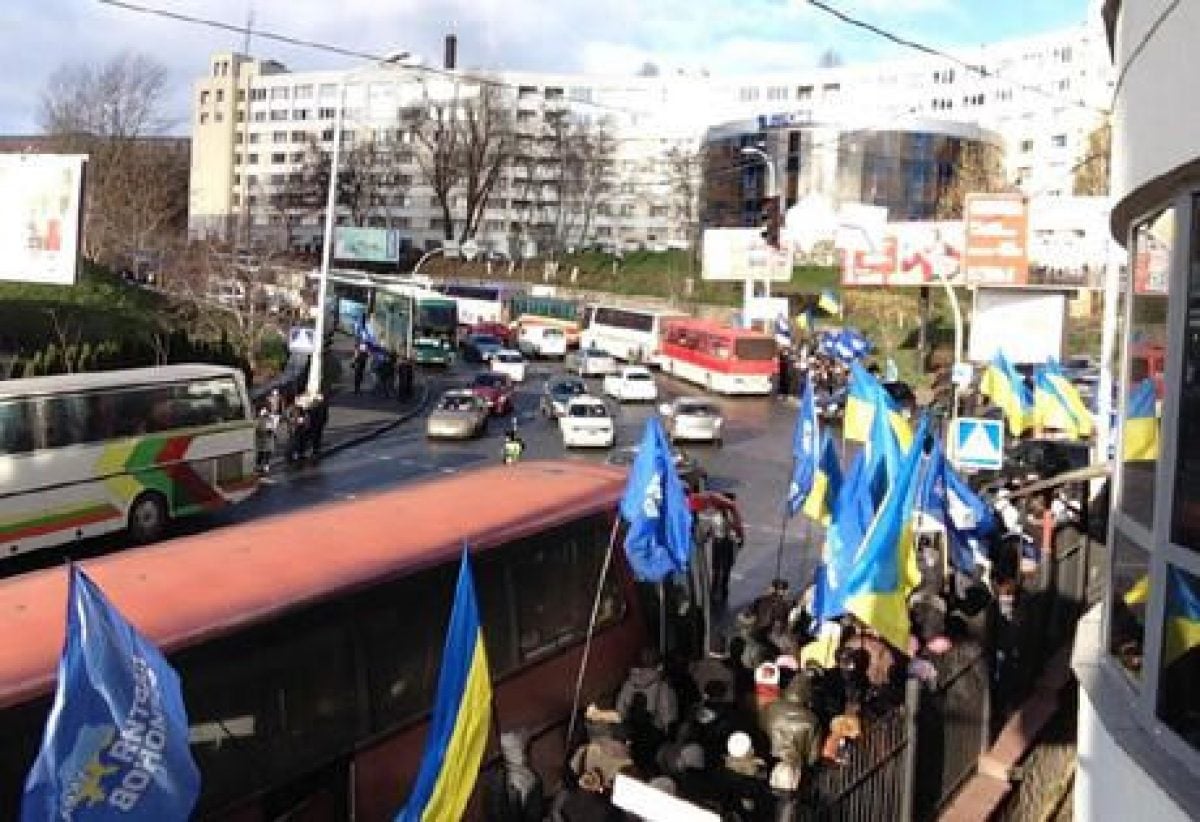 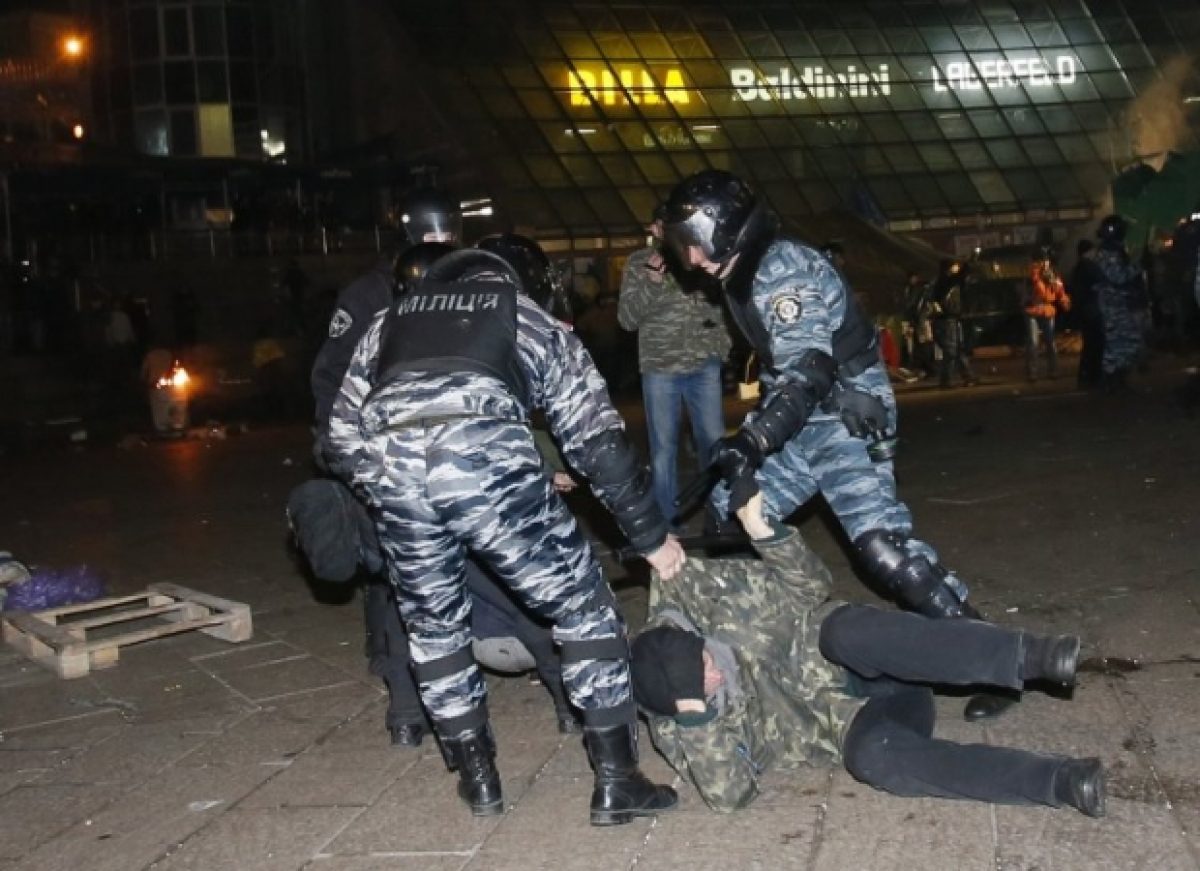 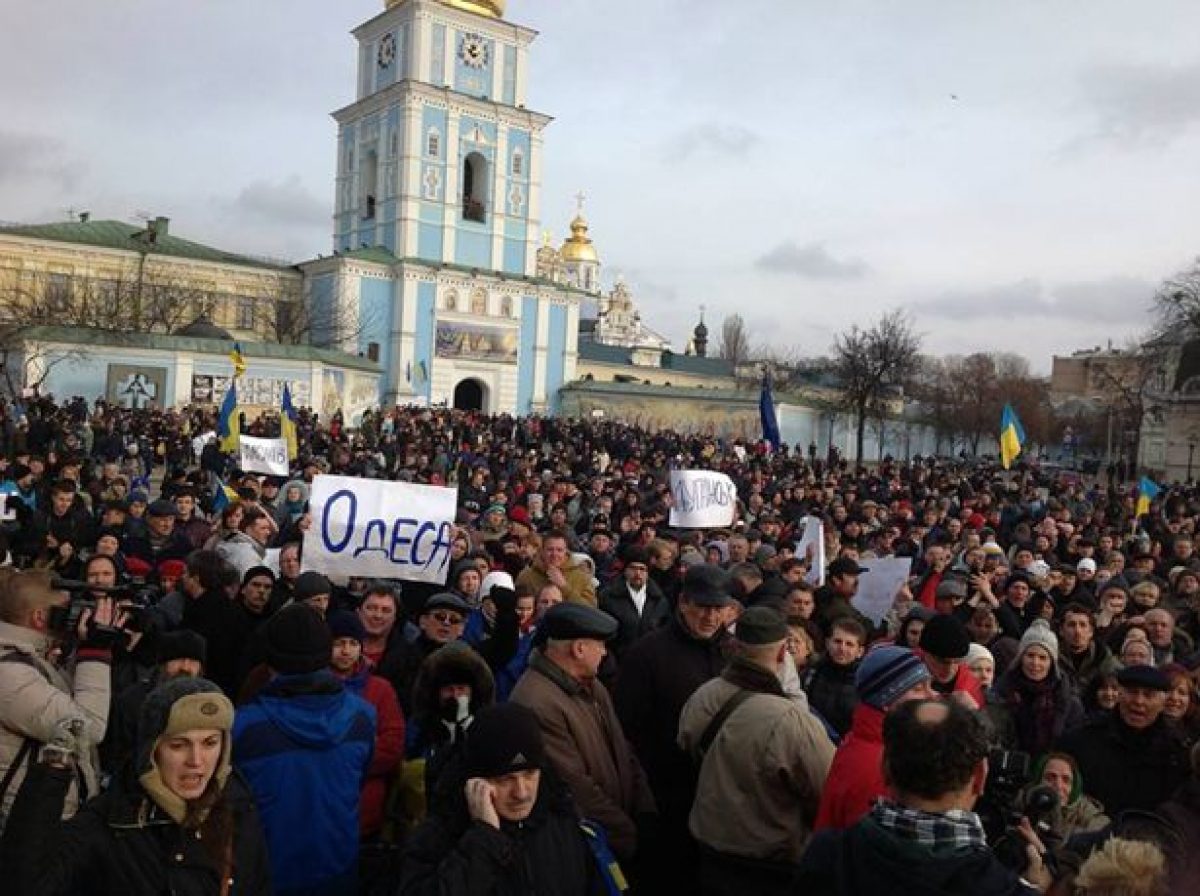 On November 23, police officers tried to oust the protesters from the Maidan, justifying this by the need to install a Christmas tree, which later became one of the symbols of the Euromaidan. On November 24, the first large-scale rallies took place in Kyiv (100,000 participants) and Lviv (about 20,000 people). Mass events also continued in Luhansk, Dnipropetrovsk, Kharkiv, Donetsk, Odesa, Cherkasy and other cities those days. However, the rallies in some cities were dispersed by the security forces. On November 26, students of Taras Shevchenko National University in Kyiv and the National University of Kyiv-Mohyla Academy joined the protests. A warning and general student strikes took place in the following days.

The protesters did their best not to identify themselves as any political force, so there was a taboo on the use of symbols of political parties. Although the opposition politicians were present at the rallies.

As the summit approached and ended in Vilnius, the protests gradually decreased, there were fewer people who spent the night on the Maidan. But…

Right after the Vilnius Summit, on the night of November 30, 2013, the Berkut riot police received an order to disperse the protesters who were still on the Maidan. Berkut officers beat dozens of activists during a forced dispersal, these were mostly young people. The journalists recorded cases of abuse of force by members of the special detachment of the Interior Ministry. Some of the protesters were able to find shelter in St. Michael's Golden-Domed Monastery, which had been one of the strongholds of revolutionary activists for several months.

Subsequently, the authorities explained the decision to disperse the protesters with the need to prepare the square for the pending New Year holidays, in particular, to install the Christmas tree.

Millions on the streets

Already in the morning after the crackdown with bloodshed, indignant citizens began to gather, their number considerably exceeded that of the participants in the Euromaidan at the beginning. The People's Viche (gathering) in Kyiv on December 1 gathered, according to various estimates, from 500,000 to one million people. It was the beginning of the revolution. 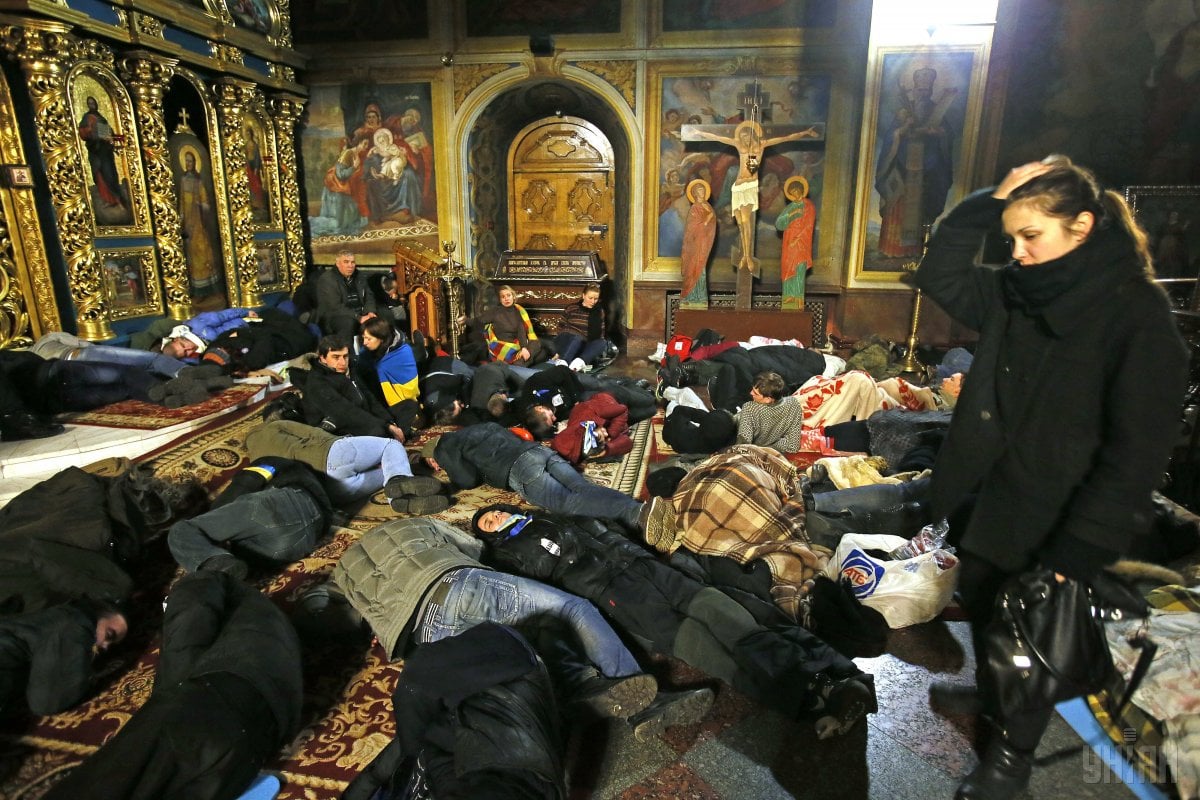 The protesters were able to "repulse" police officers from the Maidan Nezalezhnosti Square, who had already begun to install the Christmas tree. The Interior Ministry's troops, who were mainly conscript soldiers and who were assigned to protect the square, did not show any special resistance. Having occupied the Maidan, the protesters erected barricades to prevent the recurrence of events on the night of November 30.

One of the Revolution of Dignity milestones was December 11. At night, the special forces again tried to disperse the protesters. In the early hours of Wednesday, when the security forces again attempted to storm the Maidan, the warning bells were heard from St. Michael's Golden-Domed Monastery for the first time in several hundred years.

The protest actions, which lasted from late November 2013 until late February 2014, were called "Euromaidan," "Maidan", and later the "Revolution of Dignity."

As a result, the then President Viktor Yanukovych, after a mass shooting of people in the center of Kyiv, fled to Russia in February. The Verkhovna Rada of Ukraine took full responsibility for the government and appointed presidential elections for May 25. Petro Poroshenko won the election. On June 27, 2014, he signed the Association Agreement with the EU in full.

Russia, using the weakening of power in Kyiv and acting in violation of the 1994 Budapest Memorandum, annexed Crimea and unleashed a hybrid war in Donbas, which has been lasting for over 3.5 years already.

If you see a spelling error on our site, select it and press Ctrl+Enter
Tags:UkraineanniversaryrevolutionofdignityEuromaidan