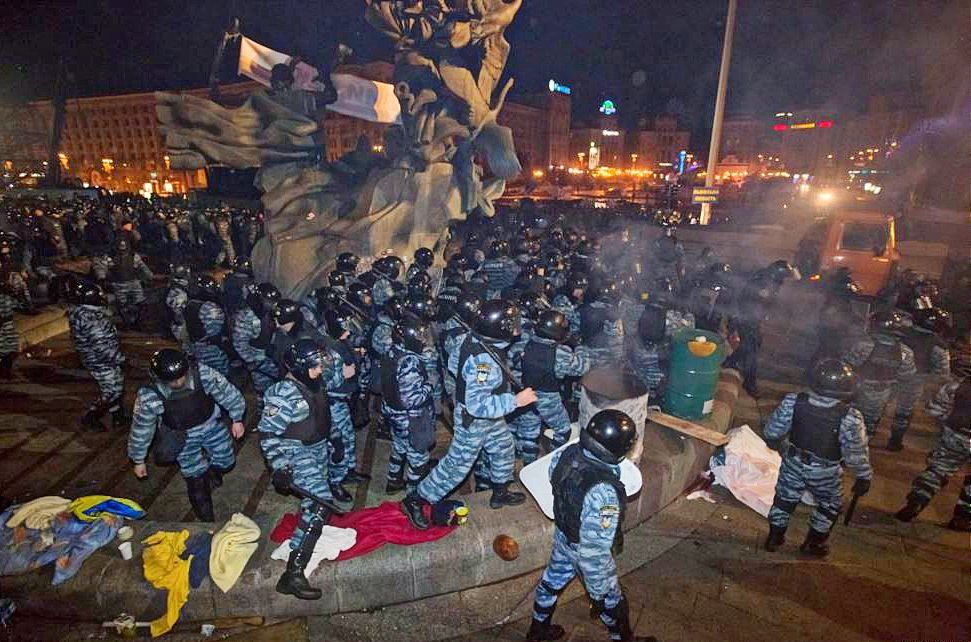 The "evidence" was contained in a film aired a few days earlier on Italian TV, which featured three Georgians who said they were part of a group of foreign snipers paid to gun down protesters and police in Kyiv and thus provoke Yanukovych's overthrow, according to BBC.

Italian TV also appeared to suggest that the film called into question the sanctions imposed on Russia over its intervention in Ukraine.

But BBC Monitoring has found evidence casting doubt on the veracity of one of the Italian film's key witnesses.

The film features testimony from three Georgian nationals who say they were brought to Kyiv in the early part of 2014 to act as agents provocateurs. The men suggest they were sent to Ukraine on the orders of former Georgian President Mikheil Saakashvili, and also received instructions from an American sharpshooter.

Two of the men, named in the film as Koba Nergadze and Zalogi Kvaratskhelia, were interviewed by Micalessin in Skopje, the capital of Macedonia.

The third, captioned as Alexander Revazishvili, was interviewed in another eastern European country, which the filmmakers said they had been asked not to identify.

Read alsoRussia gives suspected Euromaidan killers asylum, imprisons Maidan activists"We were to provoke the Berkut riot police so that they would turn against the crowd and attack the people," he said, adding that on February 20, he was taken to the building of the Kyiv Conservatory, a music academy near the scene of the Maidan protests, and were given guns by one of the protest leaders there.

"We were ordered to shoot down both the Berkut and the protesters indiscriminately. That was why I was dumbstruck and shocked," he told the filmmaker.

But there is reason to question whether Revazishvili is telling the truth, BBC Monitoring wrote.

Read alsoEuromaidan's anniversary: The Revolution of Dignity in flashback (Photo, video)The film then shows a close-up of the smartphone screen, which features a man, his face partly obscured by a cap, drinking from a cup and smoking a cigarette. From this footage, it is not possible to say definitively whether this man is Revazishvili or not. The filmmakers do not identify the Russian TV report, but the blurred caption at the bottom of the smartphone screen appears to contain the words "Georgian mercenaries".

This is enough to track down the report via Google. It turns out to be a report published by the pro-Kremlin TV station Life on December 1, 2016, that also features claims that Georgian snipers were responsible for the deaths at the Maidan protests in February 2014, though it does not name them.

The report does not include any further footage of the man Revazishvili claims is him.

But the Life reporter, Semyon Pegov, indicates that the footage shown here and in the Italian film is part of another report which he had made when he was in Kyiv covering the Maidan protests in 2014.

Read alsoUkraine's Higher Council of Justice dismisses only 10% of ''Maidan judges''This report identifies the man with the obscured face as Giorgi Svaridze, a veteran of the war in Georgia's breakaway region of Abkhazia in the early 1990s. It also reveals that he looks nothing like Revazishvili.

"Clearly, Revazishvili is an unreliable witness," BBC Monitoring says. It also means that the only piece of corroborating evidence adduced by the film to place him in Kyiv at the time of the Maidan protests turns out to be bogus, according to the report.

Read alsoItaly's sports newspaper apologizes for showing Crimea as Russian territoryIt is, perhaps, significant that, while this section of the film is on Gli Occhi della Guerra's website and in the version of the film on its YouTube channel, it does not appear to have been included in the version shown on Italian TV.

"Moscow will be no doubt be hoping that Micalessin's film increases the pressure for the sanctions to be eased or dropped," BBC Monitoring concludes.

If you see a spelling error on our site, select it and press Ctrl+Enter
Tags:RussiaUkrainePutinMaidanpropagandaItaly