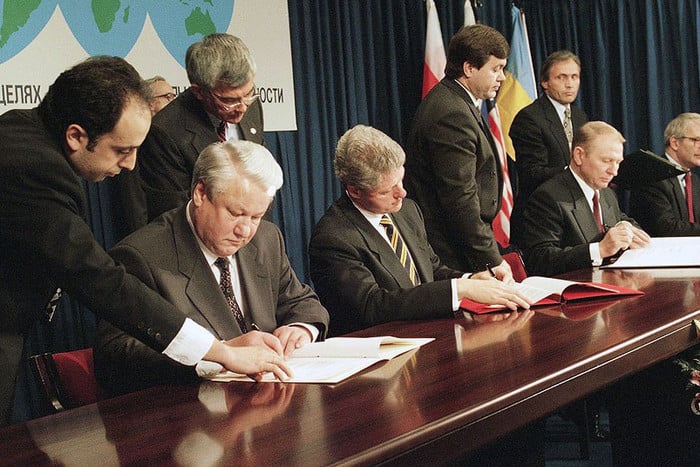 Diplomats recalled that on December 5, 1994, the United Kingdom, United States, and Russia have inked the Budapest Memorandum.

"Amid the collapse of the Soviet Union and global threats to security and the non-proliferation regime associated with the Soviet Union’s significant nuclear potential, Ukraine has made a unique contribution to the cause of global nuclear disarmament and stability," the statement says.

Read alsoLithuania mulls EUR 1.93 mln worth of arms supplies to Ukraine – media"The deployment of Russian troops in Ukraine is a gross violation of international law and provisions of the Budapest Memo. In connection with Ukraine's refusal from its nuclear weapons, in Article 2 Russia pledged to refrain from the threat or use of force against the territorial integrity or political independence of Ukraine and has provided international legal obligations that none of their weapons will ever be used against Ukraine," MFA Ukraine emphasizes.

In this regard, it is said that such behavior of Russia as a nuclear power is a threat to the nuclear non-proliferation regime in general, becoming especially acute in the conditions of nuclear blackmail and provocations by the Democratic People's Republic of Korea (DPRK).

"Providing Ukraine with security assurances by nuclear powers through signing the relevant international legal document, which was the Budapest Memorandum, was a condition under which the Ukrainian parliament agreed to Ukraine's accession to the Treaty on the Non-Proliferation of Nuclear Weapons of July 1, 1968. Ukraine considered and continues to consider such assurances as a circumstance that has become an essential reason for Ukraine's accession to the said Treaty," the statement stresses.

At the same time, it is reported that Ukraine highly appreciates the efforts by the United States, Great Britain, and France, which actually confirm their support of the territorial integrity and sovereignty of Ukraine, condemn the unlawful actions by the Russian side, and take measures in response to the aggression of the Russian Federation against Ukraine.

Read alsoTrump to be presented with $47mln deal to arm Ukraine against Russia – ABC News"We are confident that strengthening political support by practical assistance to boost Ukraine's defenses through the provision of lethal weapons should be an effective response to the growing security threat posed by the Russian Federation. This will show full commitment of the Budapest Memorandum signatory states to their obligations and strengthen the European security architecture, of which the Memorandum is an integral element," the diplomats emphasize.

Read alsoRussia started preparing for aggression against Ukraine right after Georgia war - ex-head of Intel Service"Ukraine continues to view the Budapest Memorandum as an important international political and legal instrument for ensuring Ukraine’s security on the part of the United States, Great Britain, as well as France and China, and demands that Russia fully comply with its obligations," the statement concludes.