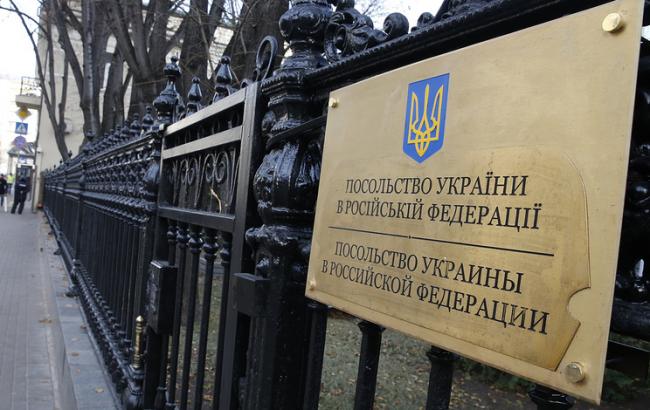 Among the protesters there are relatives of illegally detained Ukrainians Pavlo Hryb, Valentyn Vyhovsky, and Oleksiy Stohniy.

Participants in the rally held signs demanding the release of their family members.

According to the information of the protesters, the celebration of FSB Day was taking place on the embassy premises with the participation of diplomats from other countries.

Read alsoСapture of Ukrainians by Russian special services instrument of "hybrid" war - British MP"We want to show that such events, currently taking place in the Russian embassy, at which representatives of other countries attend, contradict the generally accepted norms of the whole world. Therefore, we want to show with our protest action that such bodies must not exist, whose anniversary is being celebrated today at a reception at the Russian embassy. We express our protest in this regard," Ihor Hryb, father of the abducted and illegally detained 19-year-old Pavlo Hryb, has told UNIAN.

Read alsoUkraine protests against extension of term of Ukrainian teenager Hryb's arrest in RussiaDay of the FSB is celebrated in Russia on December 20.

If you see a spelling error on our site, select it and press Ctrl+Enter
Tags:RussiaUkraineprotestembassypoliticalprisonersLetMyPeopleGoFreeHryb