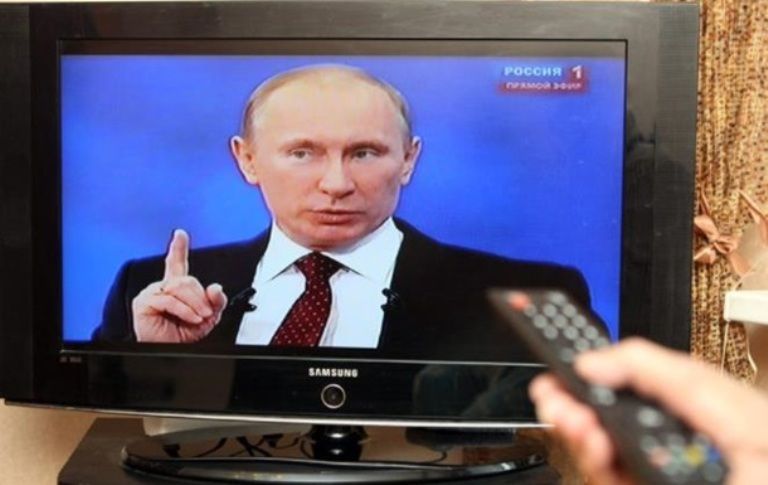 “If you wish to see someone who is a victim of Russian propaganda – I am a living example,” says Maksym Butchenko, a Ukrainian journalist and writer from Rovenki in Luhansk region, according to the New Eastern Europe. “All my relatives, even my parents used to tell me that I am a fascist.”

He adds that his family members, despite being Russian speakers, have always identified themselves as Ukrainians but “miraculously they were saying later that they were against the EuroMaidan and the ‘junta’. They were not against Ukrainian culture or nation: what actually happened was that they were watching too much Russian television and at a certain point, it changed them completely.”

“The stories Russian propaganda tells are completely phantasmagorical,” Maksym explains. Yet, many people believe the stories because the propagandist messages are constantly repeated: Ukraine is a failed state, the Ukrainian government is composed of fascists, it does not care about Donbas or Crimea, Ukrainians just want these territories back, but will “cleanse” them from the locals first.

Read alsoMcMaster says U.S. must reveal 'insidious' Russian meddling to prevent further attacks - RFE/RLSince 2013, anti-Ukrainian propaganda has been constructing the narrative which would enable and explain Russian intervention. Many see political and military intervention as legitimate, as long as it targets Russia’s long-standing enemy: fascism. According to a content-analysis the author conducted from January 1 to December 14, 2014, revealed that the word “fascists” appeared 192 times in the news and analytical programs on Russia’s Channel One, and in 43% of cases, the word referred to contemporary Ukrainians rather than the actual Nazis.

Read alsoRT's propaganda says Russia "hacked" American Christmas in disturbing video“From December 2014 the Russian military has adopted a new doctrine that explicitly states that information superiority is essential to achieving victory on the physical battleground in the modern war,” reads a recent research by NATO strategic communications center of excellence. Similarly, Kenneth Geers, a cybersecurity expert, the Atlantic Council’s senior research fellow and an affiliate of the Digital Society Institute-Berlin said during a conference at the University of Cambridge that he believed Putin considers cyber weapons to be the most important after nuclear weapons.

Moreover, Russians and their proxies turned Ukrainian infrastructure into a weapon. “In 2014 when [Russians] occupied Crimea and went to Donbas, they occupied Ukrainian towers and Ukrainian frequencies and brought Russian propaganda media to Ukrainian frequencies”, explained the First Deputy Minister of Information Policy in Ukraine Emine Dzhaparova. According to her, there is an urgent need to bring a Ukrainian voice to the region.

The Ukrainian government is trying to limit Russian propaganda by monitoring Russian media and sending reports to national security services tasked with closing down propaganda outlets. In the last three years, 77 out of 82 Russian TV channels in Ukrainian broadband networks were closed and five continue working. At the same time, according to Dzharapova, Russia only ever had up to three Ukrainian TV channels in their broadband networks, so Ukraine is still far from parity in this respect.

Read alsoEmine Dzhaparova: Our main success story in Crimea is Chonhar tower broadcasting 4 radio stations and 5 TV channels across occupied territory“Today Russian propaganda works to undermine trust in any source of information – and today in Ukraine every single survey shows that Ukrainian society does not trust the media”, Dzhaparova says. In the past three years, propaganda has gradually discredited Russian media and is now working to challenge any media narratives. At the same time, disinformation is being spread through informal interpersonal networks both offline and online.

In December Ukraine reestablished control over two borderline villages Travneve and Hladosovo. The soldiers decided to share their food with the locals, who did not receive any humanitarian help for three years. The Russian media reacted immediately by releasing news saying the food was stolen from the village’s grocery shop, even though the locals knew there was no grocery shop there for years, StopFake.org informs.

Read alsoPope Francis: fake and sensationalized news "a very serious sin"In response, a Twitter user called @olarhat mocked the message by commenting on the real picture taken by one of the villagers: “the Junta collects tribute into a bag from the occupied Travneve and Hladosovo”.

“The reintegration of Donbas will be challenging because no one knows how deeply the people living in the uncontrolled territories have changed. Ukrainians will need a lot of patience, kindness, understanding and sense of humor for the reintegration efforts to succeed,” the author concludes.