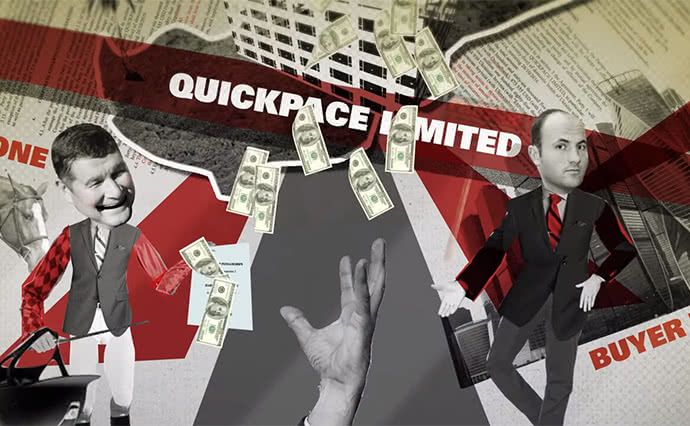 An unsigned contract obtained by Al Jazeera's Investigative Unit identifies Oleksandr Onyshchenko – the gas tycoon, former member of parliament and currently one of Ukraine's most-wanted men – and Pavel Fuchs, a real estate tycoon who made his fortune in Moscow, as the buyers in the illegal deal, Al Jazeera reported.

Other documents suggest the seller was Serhiy Kurchenko – a fugitive Ukrainian gas tycoon based in Moscow who was known as Yanukovich's "family wallet."

The contract obtained by Al Jazeera, revealed in The Oligarchs investigation, said Onyshchenko and Fuchs paid $30m, including cash and a private jet, for the Cyprus-based company, Quickpace Limited.

That company held $160m-worth of bonds and cash, which was frozen by a Ukrainian judge as they were suspected of being proceeds of crime.

"It sounds like an agreement between criminal bosses, you know? You can sign it with your blood."

It is illegal in Ukraine and abroad to trade with frozen assets.

"It's like trading in stolen goods that have been taken by the police. You're putting the cash in the getaway car," he told Al Jazeera.

The buyers aim to make a $130m profit by persuading a judge to unfreeze the assets.

Article 4.4 of the contract said that the buyers would cooperate in "taking action to remove the arrest from the accounts" held by Quickpace Limited.

Ukrainian authorities froze the assets in June 2014 across numerous companies in Cyprus, the UK, Panama, Belize and the British Virgin Islands totalling $1.5bn. It is estimated that Yanukovich and his cronies stole far more.

Evidence found on Yanukovich's abandoned property hidden outside Kyiv showed one of his clan's corporate networks. Documents obtained by Al Jazeera expose another.

They reveal how Yanukovich's clan pumped stolen money into companies in Ukraine with bank accounts in Latvia and gradually passed it through dozens of offshore shell companies in Cyprus, Belize, British Virgin Islands and other money-laundering hotspots including the UK.

Read alsoLutsenko vows seizure in 2018 of another UAH 5 bln stolen by Yanukovych team Yanukovich's name never appeared on any of the paperwork.

The companies bear the names of nominee directors – cut-out characters who appear to be the owner of a company, but simply act on instruction by the real owner.

Ukraine's new authorities started to look into the corrupt schemes after Yanukovich's removal from office in 2014.

It began a series of reforms that included the establishment of the National Anti-Corruption Bureau of Ukraine (NABU).

But nothing important has been achieved in terms of the prosecution of the corrupt individuals or the recovery of the stolen assets.

"Resistance is very strong from the elites who are in power now and the more we investigate, the more we face this resistance," Artem Sytnyk, NABU director, told Al Jazeera.

"Parliament is taking steps to sideline the management of the Anti-Corruption Agency and take control."

Nazar Kholodnytski, Ukraine's special anti-corruption prosecutor, refused Al Jazeera's requests for information, saying: "Until this investigation is complete, any comments, assertions regarding the existence or absence of certain documents is premature."

Read alsoSpain rejects Ukraine's extradition bid against fugitive MP OnyshchenkoOnyshchenko took the position that there was nothing wrong with buying a company holding frozen assets.

"You can buy cheap and try to fix the problem to make money," he told Al Jazeera.

Onyshchenko confirmed Fuchs' and Kurchneko's role in the deal, but denied the deal went ahead.

"It was like normal business, but this has not happened. We didn't buy."

However, a Cypriot lawyer and the NABU, who worked on the deal, confirmed the sale of Quickpace went through and company documents record a transfer of ownership to one of Mr Fuchs's companies.

Al Jazeera obtained a record of an initial payment of $2m from an account at Barclays Bank to another at a Russian-owned Latvian bank, Norvic Banka.

Currently, Quickpace is owned by Evermore Property Holdings Limited, a Cyprus company, which, in turn, is owned by Dorchester International Incorporated. Fuchs is its owner.

If you see a spelling error on our site, select it and press Ctrl+Enter
Tags:UkraineYanukovychinvestigationOnyshchenkoKurchenkotycoons