A Ukrainian diplomat said the consuls pay visits to detained Ukrainians across Russia. 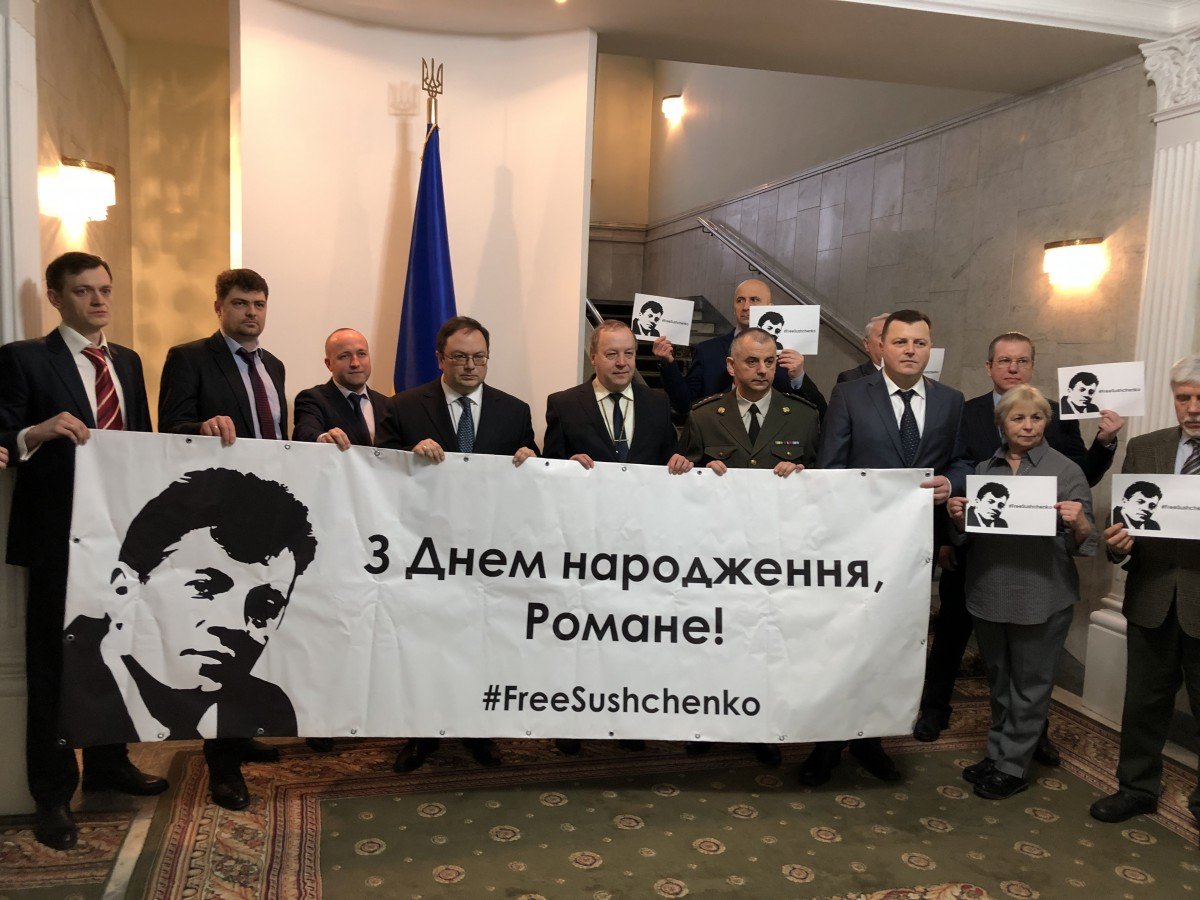 A flashmob was staged at the Ukrainian Embassy in Moscow on the occasion of the birthday of Ukrainian journalist Roman Sushchenko, who had been illegally held in the Lefortovo detention center after being charged with "espionage".

Ukrainian diplomats flew a banner saying "Happy Birthday, Roman!" and a hashtag #FreeSushchenko to express their support, according to an UNIAN correspondent in Russia.

Charge d'Affaires of Ukraine in the Russian Federation Ruslan Nimchynskiy said that the consul had arrived in the detention facility to meet with Roman Sushchenko and send everyone's greetings.

"We wish him strength of mind and good health. We have hope and we are doing everything so that Roman meets his next birthday with his friends and family," Nimchynskiy said.

Read alsoСapture of Ukrainians by Russian special services instrument of "hybrid" war - British MPHe stressed that the situation with the access for diplomats to Ukrainian political prisoners in Russia had never been easy. Nimchynskiy added the consuls pay visits to all across Russia.

"Sometimes our consuls drive a thousand kilometers to provide assistance, both moral and financial," he said.

"Ukraine will do everything possible so that journalist Roman Sushchenko would soon return home just as other Ukrainians who are being held hostage in Russia, occupied Crimea, and Donbas," Ukrainian President Petro Poroshenko wrote on Facebook.

Read alsoMoscow court extends Sushchenko's arrest until March 30As UNIAN reported earlier, the Russian Federal Security Service (FSB) on September 30, 2016, detained an Ukrinform correspondent, Roman Sushchenko, in Moscow, labeling him a "Ukrainian intelligence operative" who allegedly "deliberately collected classified information on activities of the armed forces and the national guard of the Russian Federation." Sushchenko was officially charged with espionage.

On November 10, the Moscow court found it legitimate to extend the arrest of Sushchenko until November 30.

On November 27, the Moscow City Court extended the arrest of Sushchenko for another two months, until January 13, 2018.

If you see a spelling error on our site, select it and press Ctrl+Enter
Tags:RussiaUkraineFreeSushchenkoembassypoliticalprisonerflashmobbirthday