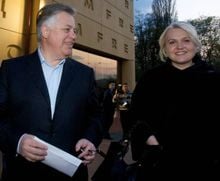 Chairman of the revision commission of Kyiv Independent media trade union Yuri Shelyazhenko calls upon bride of leader of the Communist Party of Ukraine Petro Symonenko journalist Oksana Vashchenko not to marry him. Korrespondent reports.

“Recent events in the Verkhovna Rada showed that your groom hates journalists. He slandered journalist of STB television channel Olga Chervakova, who went through assault from the side of the party colleague of your groom”,  Shelyazhenko addressed to Vashchenko.

It was said as an answer to statement of P. Symonenko that journalist Olga Chervakova provoked the conflict by herself, when party colleague of P. Symonenko Oleksandr Tkachenko pulled out the microphone and threw it from the  staircase.