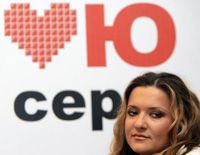 The most famous singers of Ukraine united in order to support actions of Prime Minister of Ukraine Yulia Tymoshenko . They will start their all-Ukrainian tour under the name “With Ukraine in Heart” on September 12.

According to an UNIAN correspondent, representative of initiator of the tour – All-Ukrainian Charitable Tavricheskyi Fund – Sergiy Kovalchuk said this at the news conference in the capital today.

All these artists said at the news conference that they united in order to carry out big concerts in different cities of Ukraine, to meet with youth in order to unite society.