German says that she to pay Shkil UAH 33 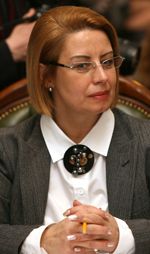 Lawmaker, Party of Regions member Anna German says that according to the decision of the court she will pay to lawmaker Andriy Shkil (the faction of Yulia Tymoshenko Bloc) UAH 33.

A. German said this on the air of 5Kanal commenting decision of Shevchenkivskyi district court of Kyiv city.

As it was reported earlier, on September 16, 2009 Shevchenkivskyi district court decreed to satisfy the suit of A. Shkil to A. German, particularly – to recognize all she said as  unauthentic information, exact from her UAH 33 for moral damage and oblige the respondent to refute slander on the air of Inter television channel.