Yatsenyuk is ready to buy clothes washer to Tymoshenko 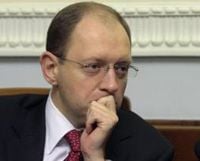 Candidate for the post of President of Ukraine Arseniy Yatsenyuk believes that the statement of Yulia Tymoshenko about support of V. Yushchenko in the second tour, if he gets there together with Victor Yanukovych is “political-technological step in order to attract votes of electors from Western Ukraine”.

The press service of A. Yatsenyuk disclosed to UNIAN that he noted that it was said “at the territory of the Western Ukraine on advice of her political technologists”.

He added that ”if it is necessary to wash clothes, I will by her a clothes washer”.

As UNIAN reported earlier, Yu. Tymoshenko gave an interview to Lviv television on December 14 and assured that in case if she does not enter to the second tour of presidential election she will support the candidate from the democratic forces, “in spite of history of our relations”.

“I want to note that it is necessary to think about Ukraine in the second tour. If I do not get into the second tour I will definitely support the candidate from the democratic forces, in spite of history of our relations”, said Yu. Tymoshenko.

Yu. Tymoshenko sees Victor Yushchenko as this candidate and she illustrated her readiness to support the democratic candidate by her phrase, which she said in 2004. “I remind once more what I said in 2004: I am ready to wash clothes in the headquarters of President V. Yushchenko”, said Yu. Tymoshenko.