Tymoshenko told about her relations with son-in-law 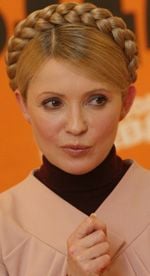 Prime Minister of Ukraine Yulia Tymoshenko loves and respects her son-in-law very much.

According to an UNIAN correspondent, Yu. Tymoshenko said this during the direct telephone line with readers of “Komsomolska Pravda in Ukraine” newspaper.

Yu. Tymoshenko also said that when her son-in-law calls her he starts talking with words: “Mum, good afternoon, it’s you son”. “It is pleasant to me, because he speaks so softly with a little ascent. I love him very much and respect him as a personality, because his has the great heart of  a real man”, noted the Prime Minister of Ukraine.