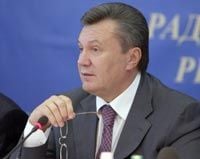 President of Ukraine Victor Yanukovych demands to impose a penalty on officials of state power bodies, in particular, on deputy ministers who impede fulfilling the tasks of economic reform in part concerning simplification of state regulatory policy.

According to an UNIAN correspondent, the President of Ukraine said this summing up the results of the sitting of the Committee on Economic Reforms that took place in Kyiv today.

The head of the state criticized an activity of many ministries, departments and some officials who impede fulfilling the tasks of program of the economic reforms in part concerning simplification of entrepreneurship regulation system.

V. Yanukovych passed a list with a range of these state power bodies to Prime Minister of Ukraine Mykola Azarov and gave instructions to him to consider the results of their activity at the sitting of the Cabinet of Ministers, and in case of need to impose a penalty on corresponding officials up to dismissal them from their posts.

The head of the state required from ministers to provide a high level of implementation practice among subordinates. “This is a “yellow card”, the next one will be “red”. Agreed or not? ? In friendly way”, noted V. Yanukovych.