Yanukovych was operated on 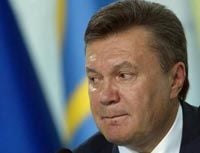 President of Ukraine Victor Yanukovych was operated on his right knee joint.

A source in the Administration of President of Ukraine disclosed this to UNIAN.

According to the words of interlocutor of the agency, the President of Ukraine was operated on last weekends in Ukraine.

As UNIAN reported earlier, on February 25 within the framework of “Talk with the country” television project the head of the state said that he injured his right knee while playing tennis.

It is also known that earlier V. Yanukovych also had problems with knee.