More than 10 thousands signatures collected for release of Tymoshenko 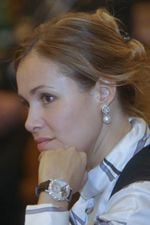 Committees on resistance to dictatorship have been formed all over the country. More than 10 thousands signatures have been already collected for the motion to release former Prime Minister of Ukraine Yulia Tymoshenko.

Lawmaker of Ukraine (the BYUT-Batkivshchyna faction) Natalia Korolevskaya, who took part in forming of such committee in Vinnytsa on August 9,  said this to UNIAN.

“I believe it is right to form such committees all over the country. I am on a working visit in regions right now and I can say that Ukraine will not sit calmly and watch how the leader of the opposition goes through unfair court”, said the lawmaker.

Moreover, a collection of signatures for the motion to release Yulia Tymoshenko continues. According to the words of N. Korolevskaya, more than 10 thousands signatures have been already collected.