Yanukovych: Agreement with European perspective is my principal position 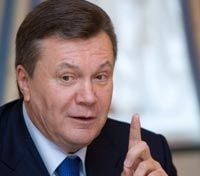 President of Ukraine Victor Yanukovych believes that the resolution of the European parliament concerning Ukraine that was adopted on October 27 reflects moods in the European Parliament.

According to his words, Ukraine is on its way of reforms for improving situation; however it is not an instantaneous process. “It is impossible to reach immediate results”, he said.

“The task that we take upon ourselves is to sign an Agreement on association in December that would have a European perspective for Ukraine. It is my principal position and position of majority of the Ukrainian society. We should have commitments from both sides”, underlined the President of Ukraine.