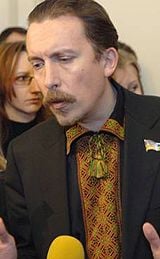 The BYUT-Batkivshchyna faction demands to consider a draft law on humanization of the legislation concerning economic crimes this week.

According to an UNIAN correspondent, lawmaker of Ukraine Andriy Shkil said this to journalists.

A. Shkil noted that a sitting of the conciliatory council of the leaders of the parliamentary factions is taking place now.