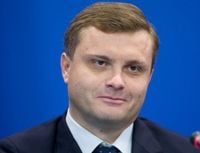 According to an UNIAN correspondent, head of the Administration of President of Ukraine Serhiy Lyovochkin said this during the meeting with journalists.

Answering the question whether it is necessary to expect the personnel changes in the government after tomorrow’s broadened sitting of the Cabinet of Ministers with the participation of V. Yanukovych, S. Lyovochkin said: “The President is working on this issue”.