Tigipko promises to recall documents on reduction of benefits 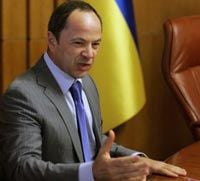 Vice Prime Minister of Ukraine Serhiy Tigipko promised that the benefits for Chernobyl cleanup veterans will be restored completely.

According to an UNIAN correspondent, one of the leaders of Chernobyl organizations telling about preliminary results of the negotiations of Chernobyl cleanup veterans with the government said this during the protest action near the Cabinet of Ministers of Ukraine.

He also noted that they reached an agreement that the documents on reduction of the benefits for Chernobyl cleanup veterans signed by S. Tigipko will be recalled.