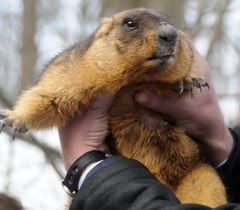 According to an UNIAN correspondent, groundhog Timko II, who traditionally was awakened on February 2 in Gaydary village of Zmievskyi District, the Kharkiv Oblast, - woke up and saw his shadow.

Employees of biological station of V.N. Karazin Kharkiv National University explained to journalists and all those present that it means that the spring will be early and prolonged, and frost will remain 2 decades.

Speaking about Euro-2012, forecasted the following: national teams of Ukraine and Russia will play in one of semifinals and Ukraine will win. Teams of Ukraine and Poland will play in final. However, “delicate” groundhog Timko II did not say who will be a winner of Euro-2012. “Probably, it should be an intrigue”, - organizers of the event explained the “behavior” of the groundhog.