Party of Regions finds candidacy for post of Karpachova 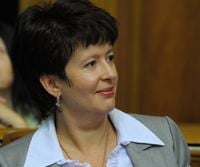 Governmental Commissioner for the European Court of Human Rights Valeria Lutkovska states that lawmakers from the Party of Regions suggested her to be a candidate for the post of ombudsman of the Verkhovna Rada of Ukraine on human rights.

According to an UNIAN correspondent, she said this at the news conference today in Kyiv answering the questions of journalists.

“A group of the lawmakers from the Party of Regions addressed me”, said V. Lutkovska having mentioned that it is not reasonable to specify lawmakers.

According to the words of V. Lutkovska, she did not carry out any consultations with the parliamentary factions because she does not believe that consultations will be useful until her candidacy is submitted to the Verkhovna Rada of Ukraine, and she believes it is not reasonable to carry out consultations in individual order.