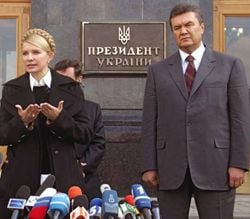 President of Ukraine Victor Yanukovych has the biggest rating among the politicians who can pretend to the post of the head of the state.

Director of “RATING” sociological group Oleksiy Antipovich said this at the news conference in UNIAN as a result of the carried out sociological poll.

UNIAN’s note. “RATING” sociological group carried out the poll on February 10-24, 2012 in all regions of Ukraine. 4 thousands respondents at age of 18 and elder took part in the poll. Error margin makes up 1.5%.