Bildt, F&#252;le and Brok: there should be no pause in relations of Ukraine and EU

Bildt, Füle and Brok said to Yanukovych that legitimacy of future Verkhovna Rada of Ukraine will depend on process of elections. 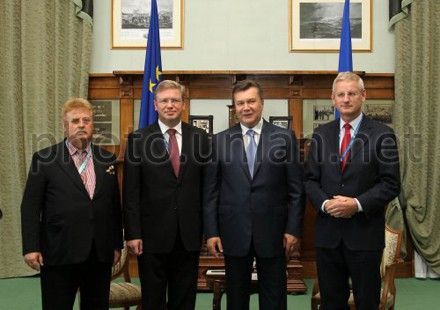 Foreign Minister of Sweden Carl Bildt, European Commissioner for Enlargement and European Neighbourhood Policy Štefan Füle and Chairman of the European Parliament Committee on Foreign Affairs Elmar Brok said to President of Ukraine Victor Yanukovych that legitimacy of future Verkhovna Rada of Ukraine will depend on process of elections.
Representative of the press office of the EU Commissioner said to an own UNIAN correspondent in Brussels that it is said in the joint statement of representatives of the EU as a result of their meeting with V. Yanukovych in Yalta today.
“The legitimacy of the future parliament will depend on carrying out of elections, which should be free and fair in accordance with the highest international standards. In this context we underlined an importance of freedom of mass media”, it is said in the report.